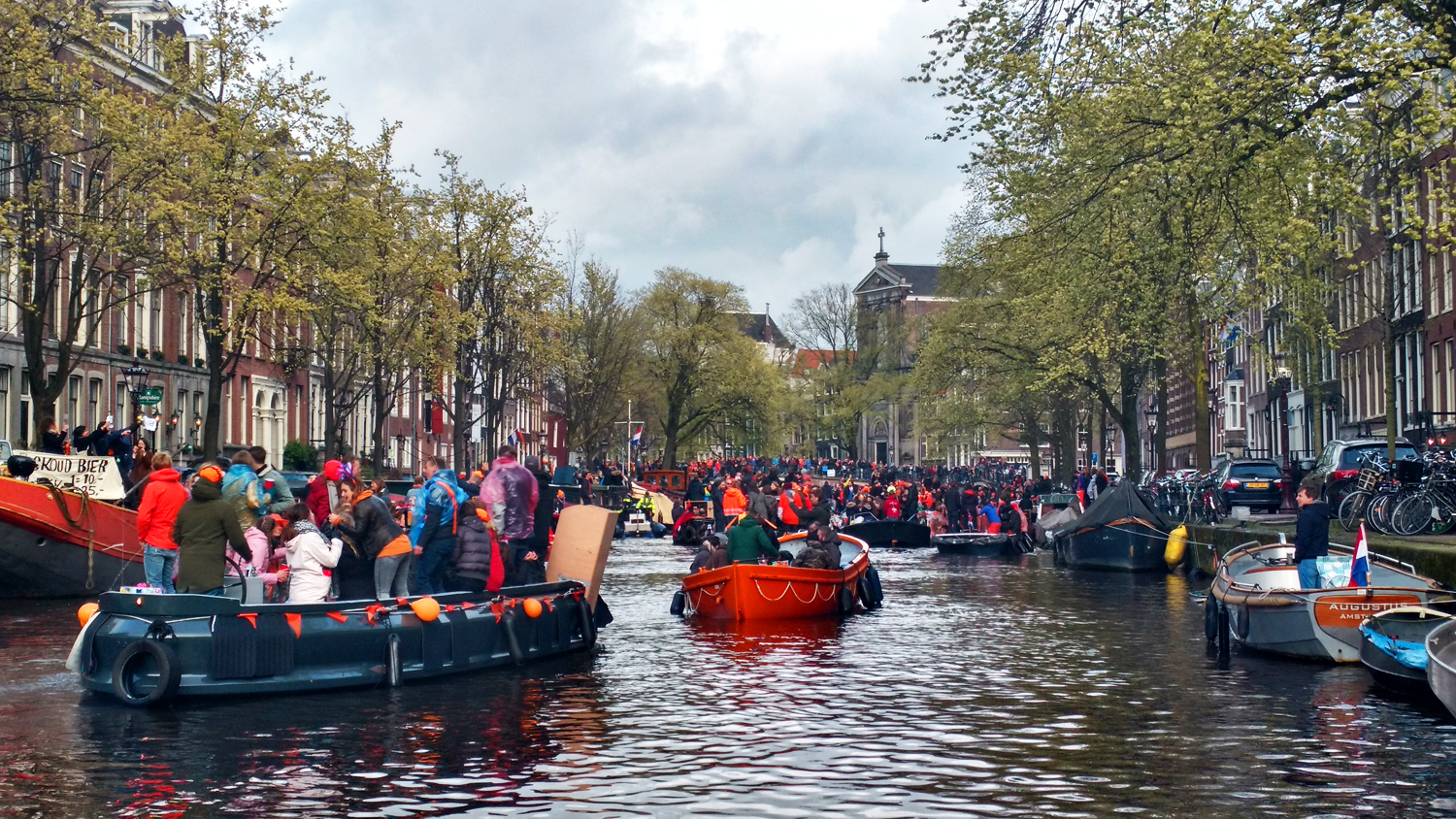 Of all the islands in the world, Piss Island probably sounds like one of, if not THE least appealing. Yet right now, there’s nowhere I’d rather be heading to more.

That’s because Piss Island is the (affectionate) name given to the floating toilet facilities on the canals of Amsterdam today and, well… I’m bursting.

It’s King’s Day in the Netherlands; an annual celebration of the monarch’s birthday and national holiday. Basically the biggest party of the year, where the whole country dresses up in orange (the colour of the Dutch Royal Family – William I of Orange and all that) and heads out to party in the streets, the parks and on the canals.

And I’m here in Amsterdam for the celebration, floating around on a party boat stocked with beer and equipped with a sound system, ticking off what is a bit of a personal bucket list moment.

Already a huge fan of the city, to visit for the mammoth party that is King’s Day always felt like it would be the ultimate Amsterdam experience. One I’ve been wanting to do for ages.

So to be here on this day does feel pretty special, even if my main concern at this particular moment is making sure our boat is steering towards the mecca of convenience I can spy further down the canal. Yes, Piss Island – and therefore relief – is in sight. Phew.

Our King’s Day started around 12 noon at the Vondelpark apartment of my generous friends and hosts, Yatin and Anjet. Dressing in our orange attire (for me a panic bought t-shirt in the airport on the way out) we plastered on the face paint, cracked open the beers and tucked into the traditional slice of Tompouce – a Dutch puff pastry, topped with orange icing to mark the occasion. 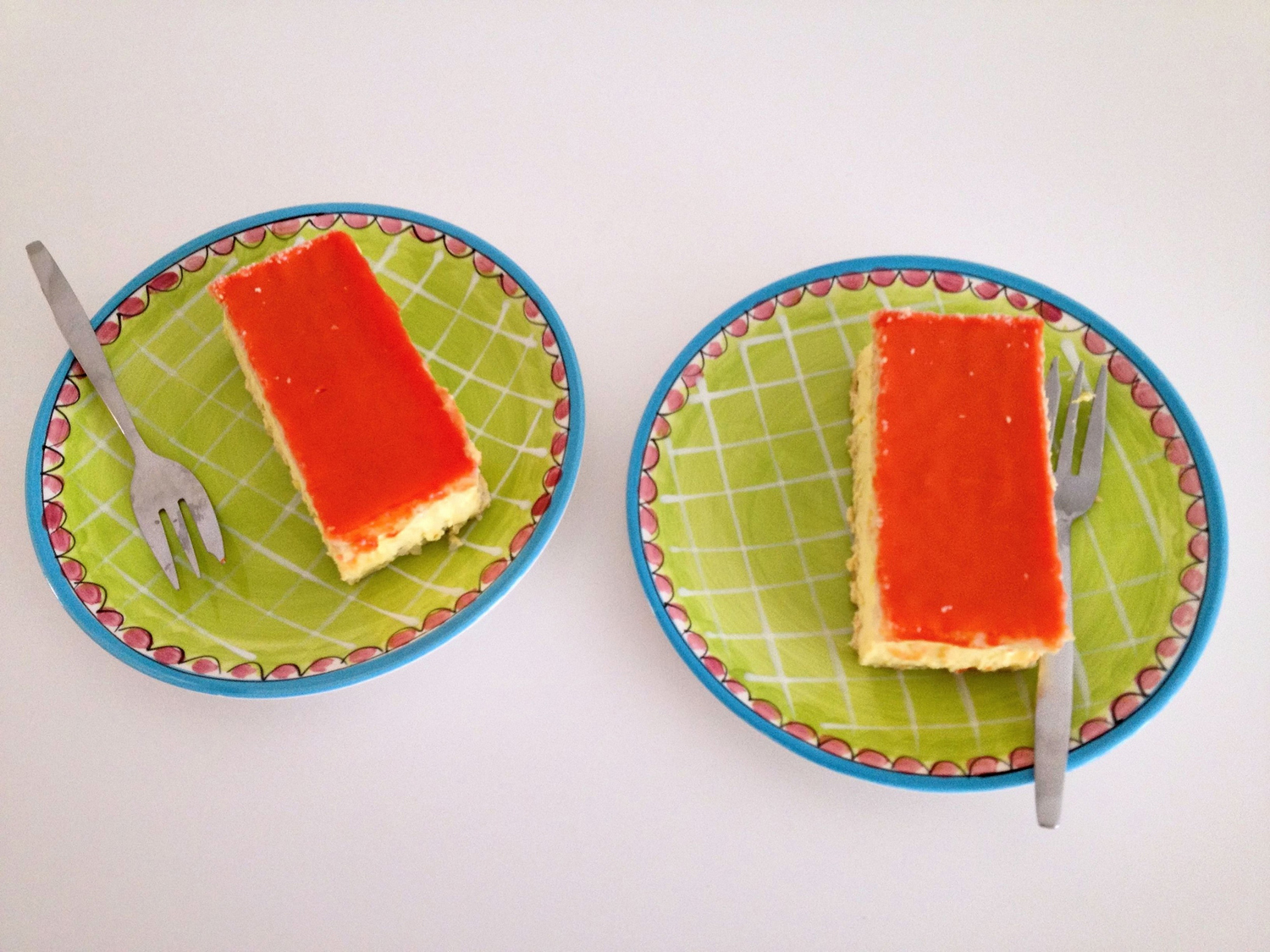 Our boat was booked for 3pm, ‘setting sail’ from a canal near Amsterdam’s Centraal Station. So around 2pm we made our way across the city, sharing the trams with swathes of beer-swilling, orange-wearing Amsterdammers. All heading off to their own King’s Day celebrations – whether those be in bars, street festivals or on a boat around the canals like us. 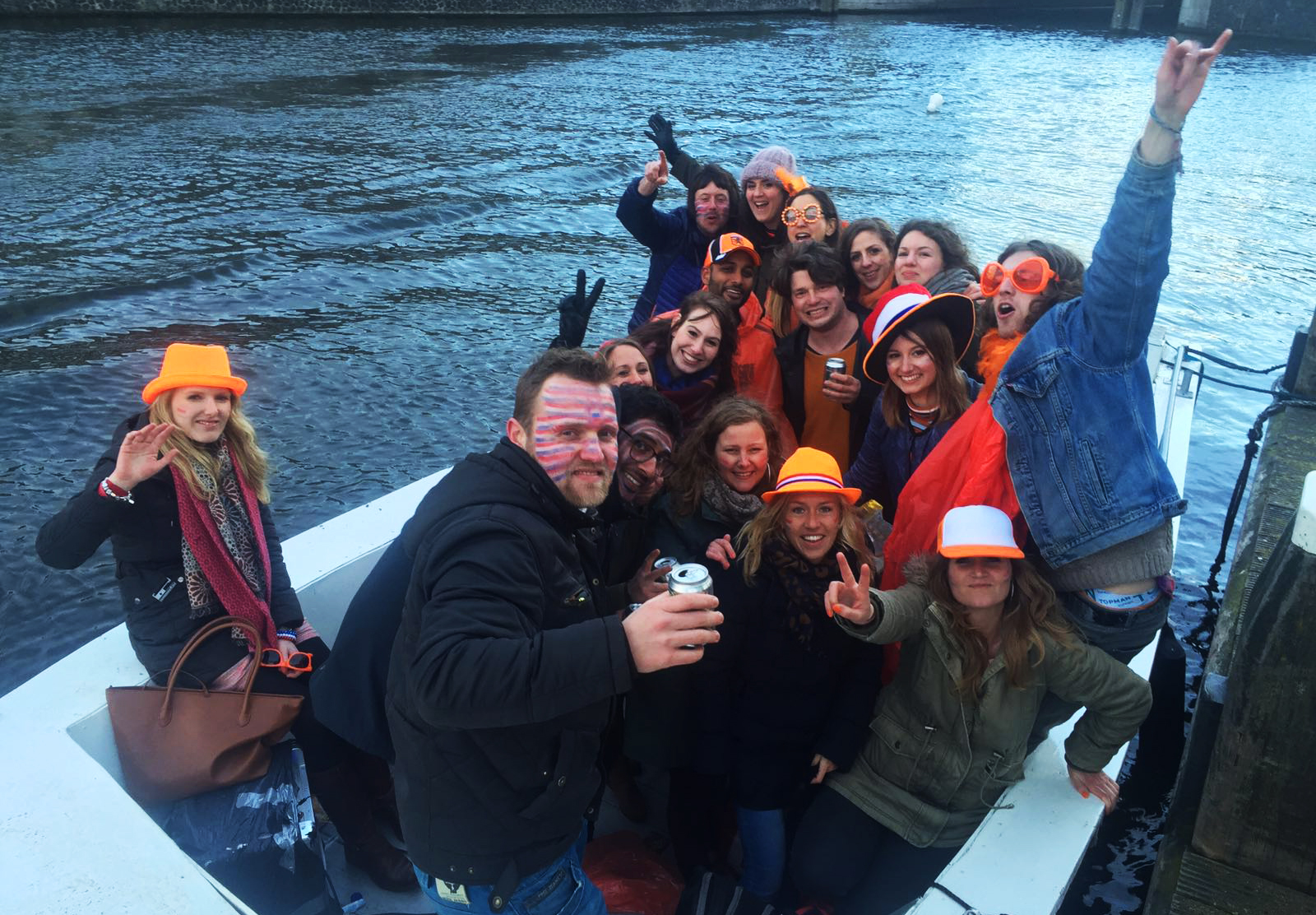 Despite the cold, wet weather (the worst on a King’s Day for years, I’m told), spirits are sky high and the atmosphere around the city is positively buzzing. A vibe that continued as the 20 of us piled onto our boat, connected our playlist to the sound system and passed around the first of many on-board Heinekens.

Now, copious amounts of beer and a boat with no toilet isn’t the best combination. Which we’re finding out now, as we sit cross-legged bemoaning the fact we ‘broke our seal’ before getting on board.

Eventually though, we do reach the promised land of Piss Island for our first toilet break. And it’s glorious, if a little unattractive. 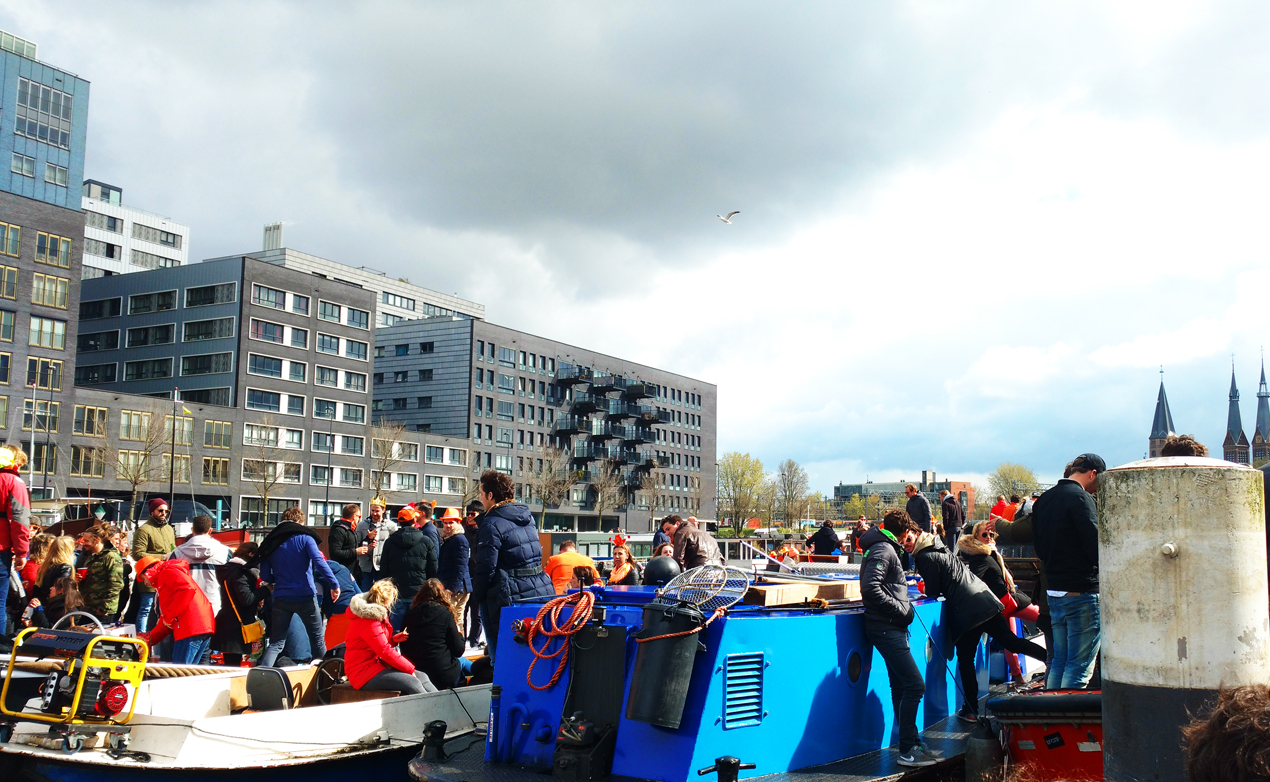 Queue for the loo – boats line up at Piss Island

It’s only now you realise how much you’ve had to drink or smoke (or probably both) throughout the day. Because actually getting onto the floating island of toilets involves clambering across the countless other boats that have pulled up to make the same pit stop, to reach the platoon of loos.

No easy task for the intoxicated, let me tell you.

Such is the good-natured atmosphere of the day though, everyone’s happy to help everyone else step from boat to boat on their way to and from the floating toilets. I spot some people have the odd wobbly moment (and have a couple myself) but don’t actually see anyone fall into the water. Unfortunately.

Toilet stop accomplished and with everyone back on board relieved and comfortable, we head off again to explore more of the waterways, weaving between hundreds of other boats celebrating King’s Day the same way as us. 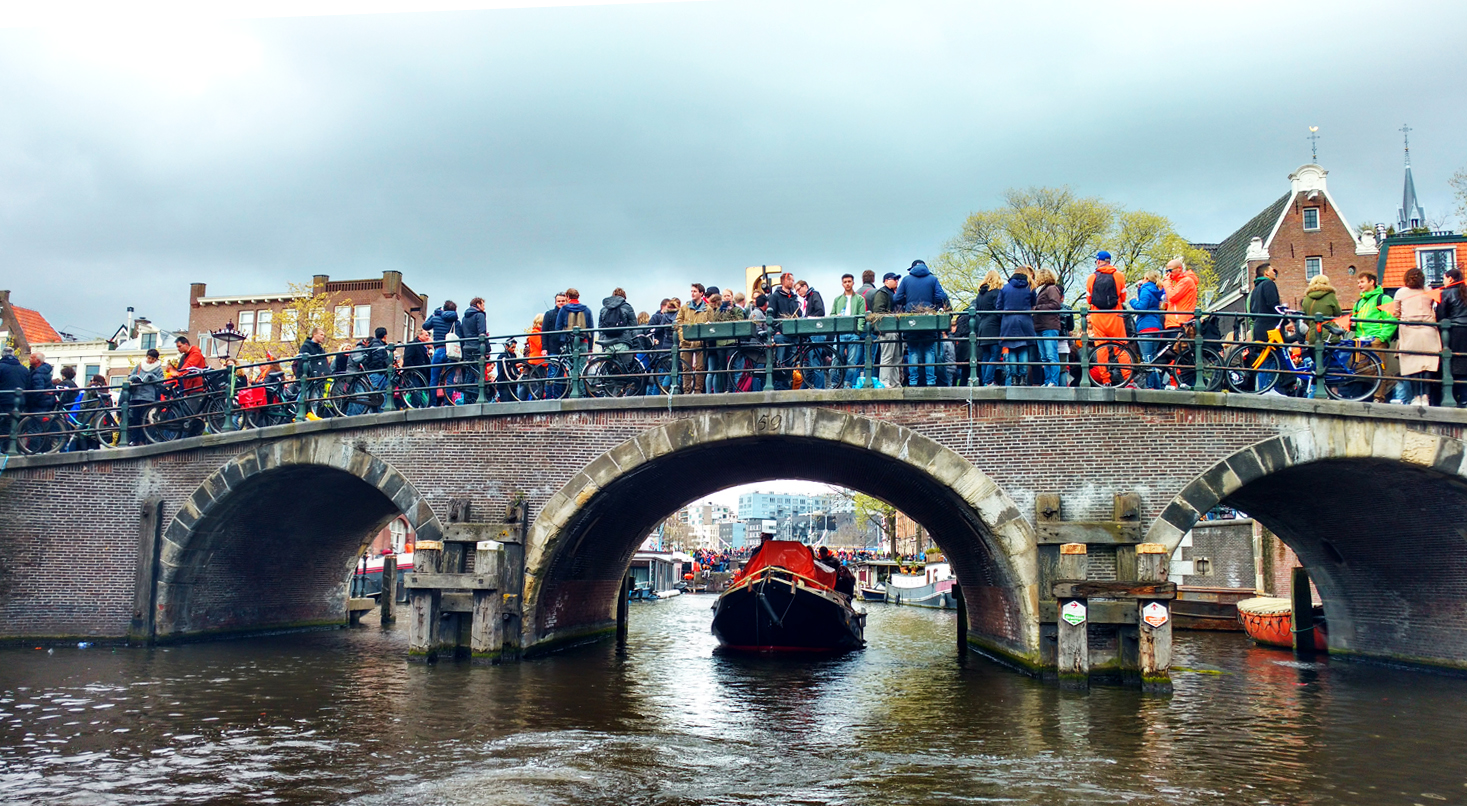 In total we spend around four hours floating around the canals and under the bridges of Amsterdam. We chat and wave and sometimes ‘crash’ into other boats that float by. Some boats are elaborately decorated, some have speakers you’d expect to find in clubs, all are filled with happy, dancing, dressed-up revellers defying the unfavourable weather. It’s safe to say beer-jackets are definitely out in force today.

When the weather does get really bad we head under bridges for respite, and wait there until the rain eases off.

Crowds line the canal banks and congregate over the bridges, everyone enjoying the mash-up of music pumped from numerous boats at the same time. And beer. Lots of beer.

When I say the whole city is out to party, I’m not exaggerating. And yet this is ‘quiet’, apparently.

You should see it when the sun’s out,

I can imagine how everything would be turned up yet another notch on a fine spring day.

But I can hardly imagine more boats on the canal as we hit absolute gridlock towards the end of our time on the boat.

All the boats out on the water seem to have come together at the same bridge at the same time (which particular bridge I don’t know – my sense of direction is blurry at this moment to say the least), bottlenecking to cause some kind of canal traffic jam.

Yet it’s the most fun traffic jam you’ve ever been in.

The boats come to a standstill and everyone is just hanging around drinking, chatting and dancing to the soundtrack of whichever boat is the loudest.

This impromptu boat party is a great way to end what has been a fantastic King’s Day celebration on the Amsterdam canals. Even with the night’s partying still to come, the experience has already been well worth the wait. It’s such a fun, friendly and fervent occasion to be involved in – everyone goes in for it 100%.

Yep, King’s Day is absolutely everything I expected, and I’ll be doing all I can to return for next year’s.