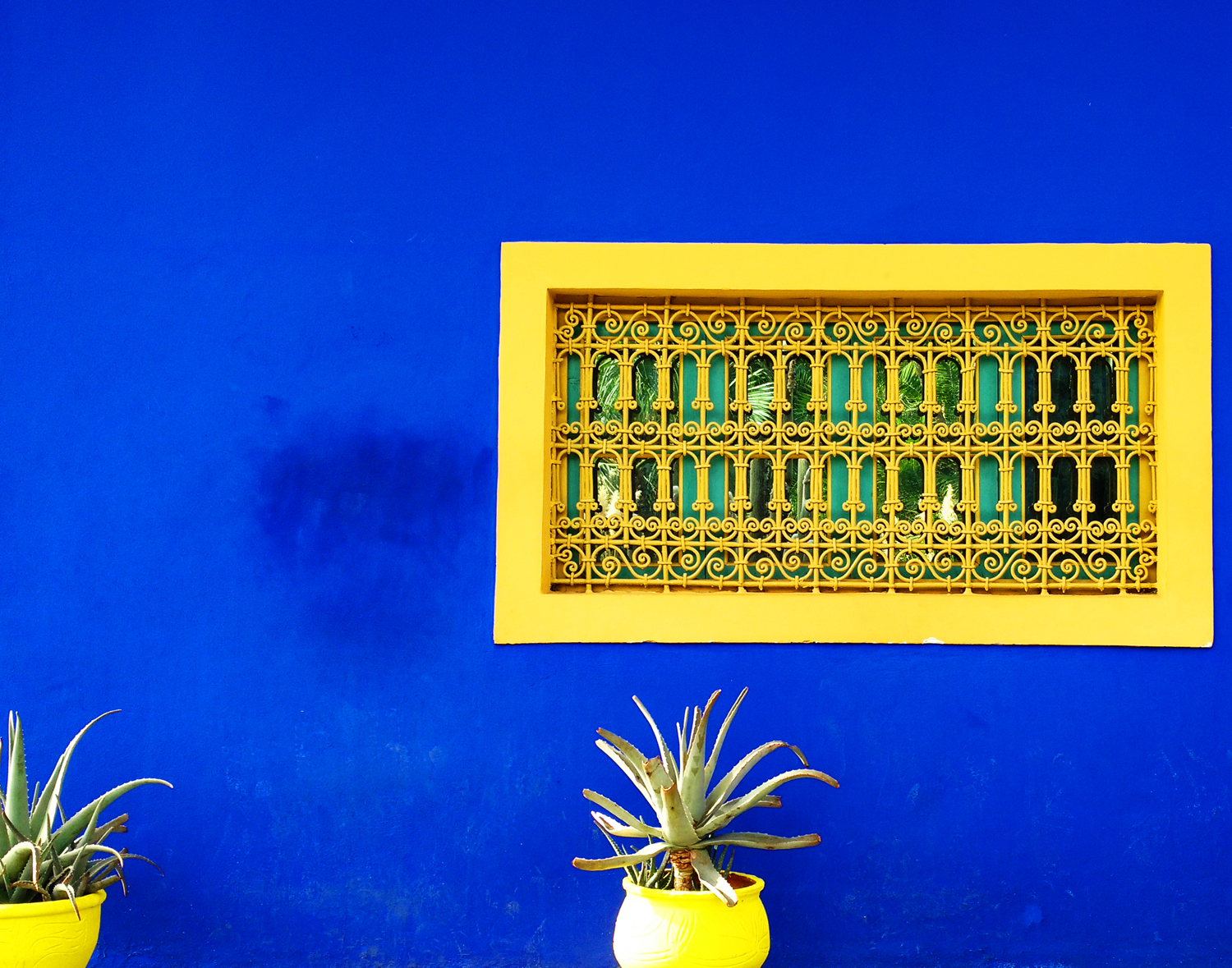 So in the last few weeks it’s gone from bloody wet to bloody freezing. And we’re still only halfway through January.

All of which really leaves me pining for the warmer climes of a recent trip… Morocco.

In fact, as it’s Blue Monday today – ‘the most depressing day of the year’ – I’m particularly thinking back to a much more uplifting kind of blue. The blue of Marjorelle Garden (or Jardin Marjorelle), in Marrakech. A colourful, peaceful oasis, 3km from Marrakech’s hectic Jemaa El-Fnaa square.

It’s the most tranquil escape from what can be an overwhelming city. Right now, it seems like the most perfect escape from the grey gloominess of January in the UK. I’d go back there in flash to relax under the warm blue skies of Morocco, amongst the vivid colours of the garden. 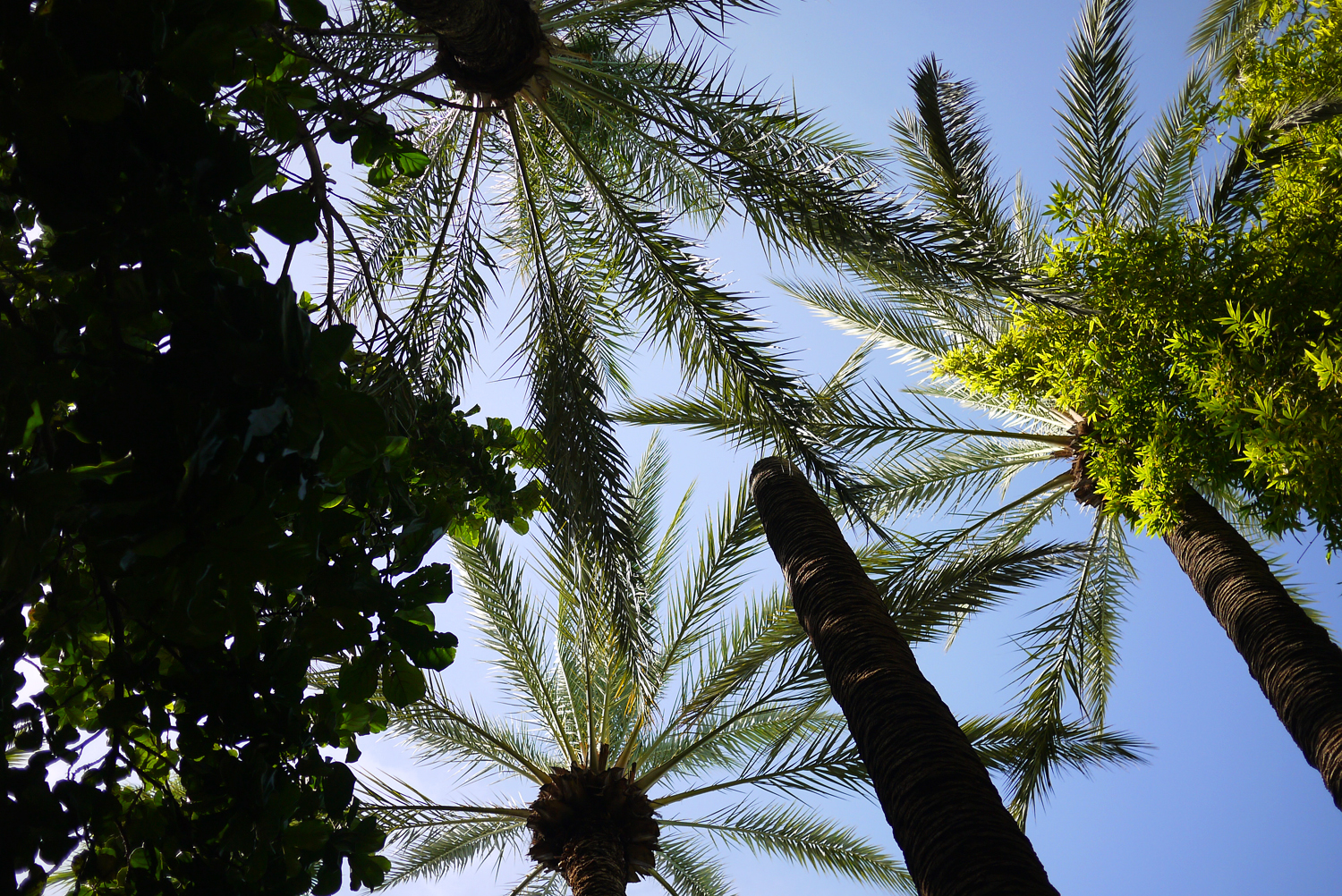 A little history of Marjorelle Garden

Now one of Marrakech’s top tourist attractions, Marjorelle Garden was created by French painter Jacques Marjorelle in the grounds of his home and work studio in the 1920s.

First opened to the public in 1947, it became famous for its exotic flowers and the bold colours Jacques Marjorelle had used to paint his villa and garden features. The particular shade of blue he chose to make so prevalent in his grounds became so renowned it ended up taking his name, Marjorelle Blue.

Following Marjorelle’s death in 1962 the garden became neglected and was saved from being turned into a hotel complex by fashion designer Yves Saint Laurent and his friend Pierre Bergé, who bought the land in 1980. Big admirers of Jacques Marjorelle, and his famous garden they’d had the pleasure of visiting themselves, Saint Lauren and Bergé moved into the villa and went about restoring the grounds to their former beauty.

Today Marjorelle Garden remains a gorgeous, relaxing retreat away from the intense hustle and bustle of Marrakech. 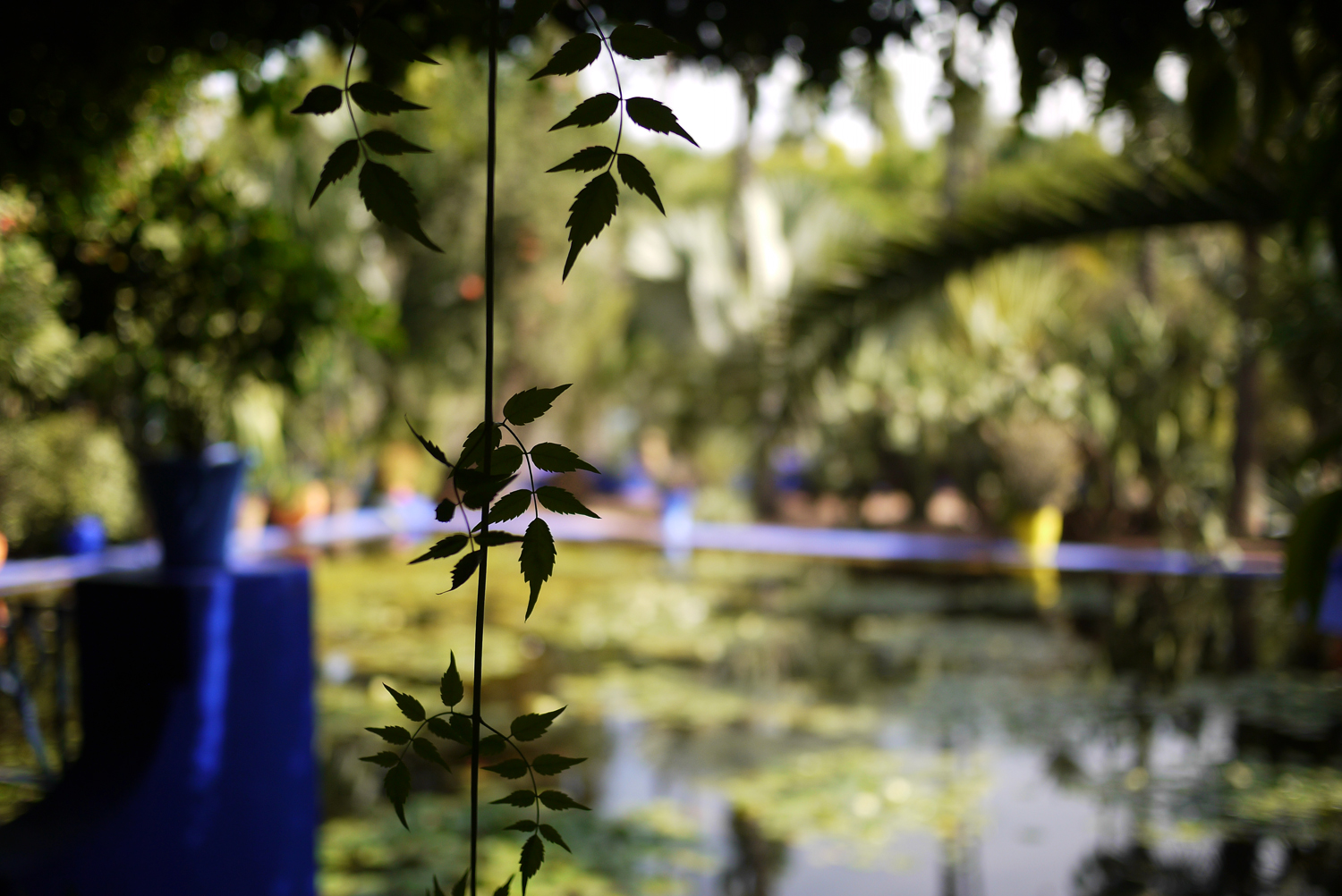 My visit to MARjorelle Garden

Unwittingly, we arrived in Marrakech during a religious holiday, Eid Al-Adha – the Feast of Sacrifice, and pretty much everywhere was shut. (This was September, but Eid Al-Adha changes each year according to the moon, so check your dates). The shutters were down on all the souks and the only signs of life around the Medina were the locals burning sheep on alley corners – charred skulls strewn around the streets, sheepskins hung out to dry. Which was some welcome, it has to be said.

With little else to do whilst everything stopped on this religious holiday, we decided to walk the three kilometres out to Marjorelle Garden from the Medina, rather than take a petit taxi.

It’s not the prettiest walk. Leaving the ancient walled Medina behind, we crossed dual carriageways and wasteland. There was very little shade from the mid-afternoon heat. And it was hot. Really hot.

So yeah basically, don’t walk it. Even if you have loads of time on your hands.

When we finally arrived at Marjorelle Gardens, flustered and thirsty, we were relieved to see a small queue at the kiosk, confirming that this attraction at least, was open. So we stocked up on (overpriced) water and paid 70 dirhams to enter the garden, plus 10 dirhams to get access to the small museum inside. (That’s about £6 altogether).

As soon as we stepped into the entrance courtyard, it was clear that all the prettiness missing from the surrounding area was being saved for the garden itself.

A bubbling fountain surrounded by a blue-tiled mosaic greeted us, and we sat down in the shade beside it for five minutes just to cool down and take in the calmness, before going to explore. 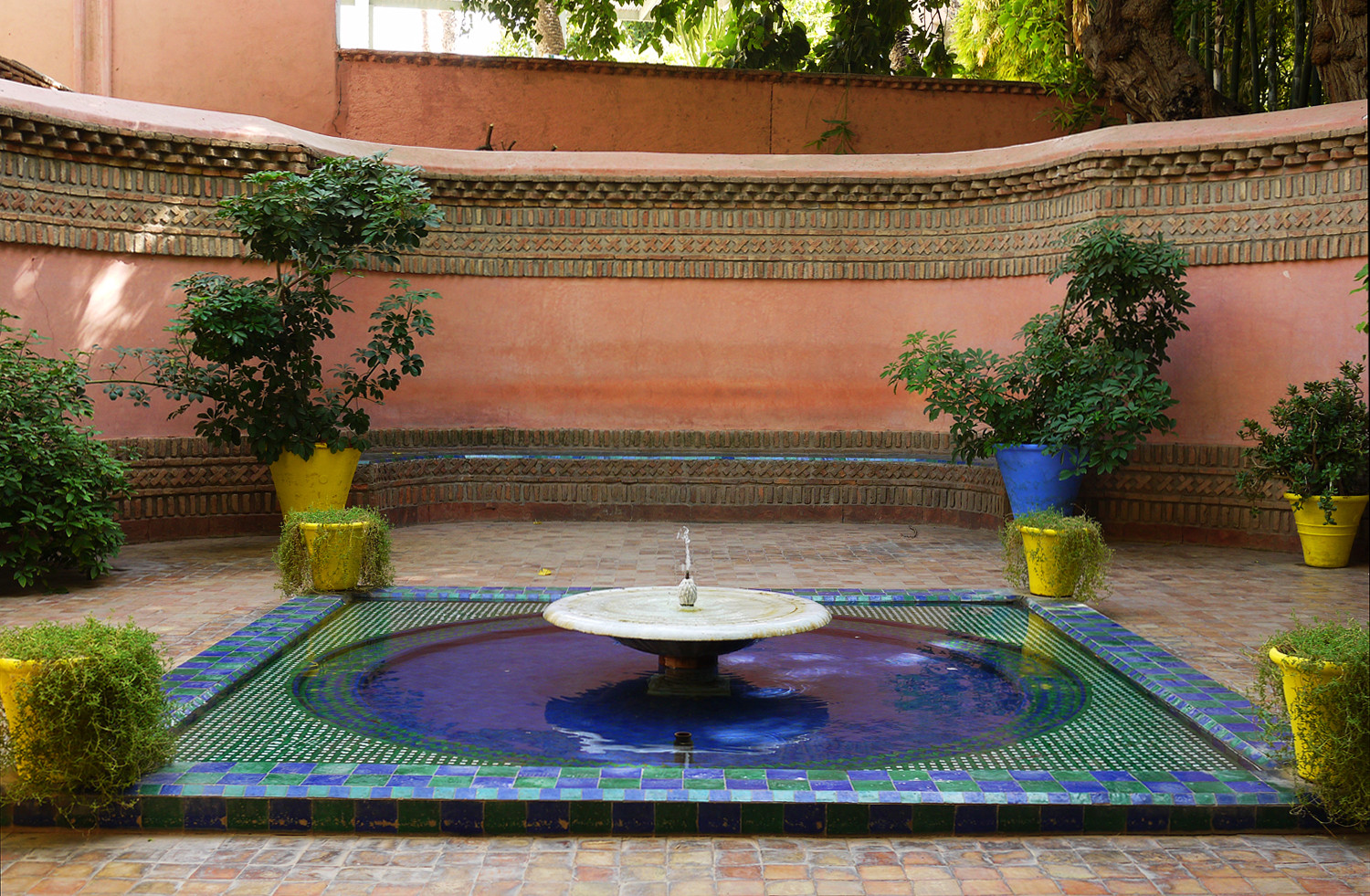 Marjorelle Garden is fairly small, but it’s packed full of features. Predominantly shaded by palm trees, tall bamboo plants and covered pergolas, it’s pleasantly cool and refreshing. Much like when inside a riad’s peaceful courtyard, you’d never guess you were actually still in Marrakech. 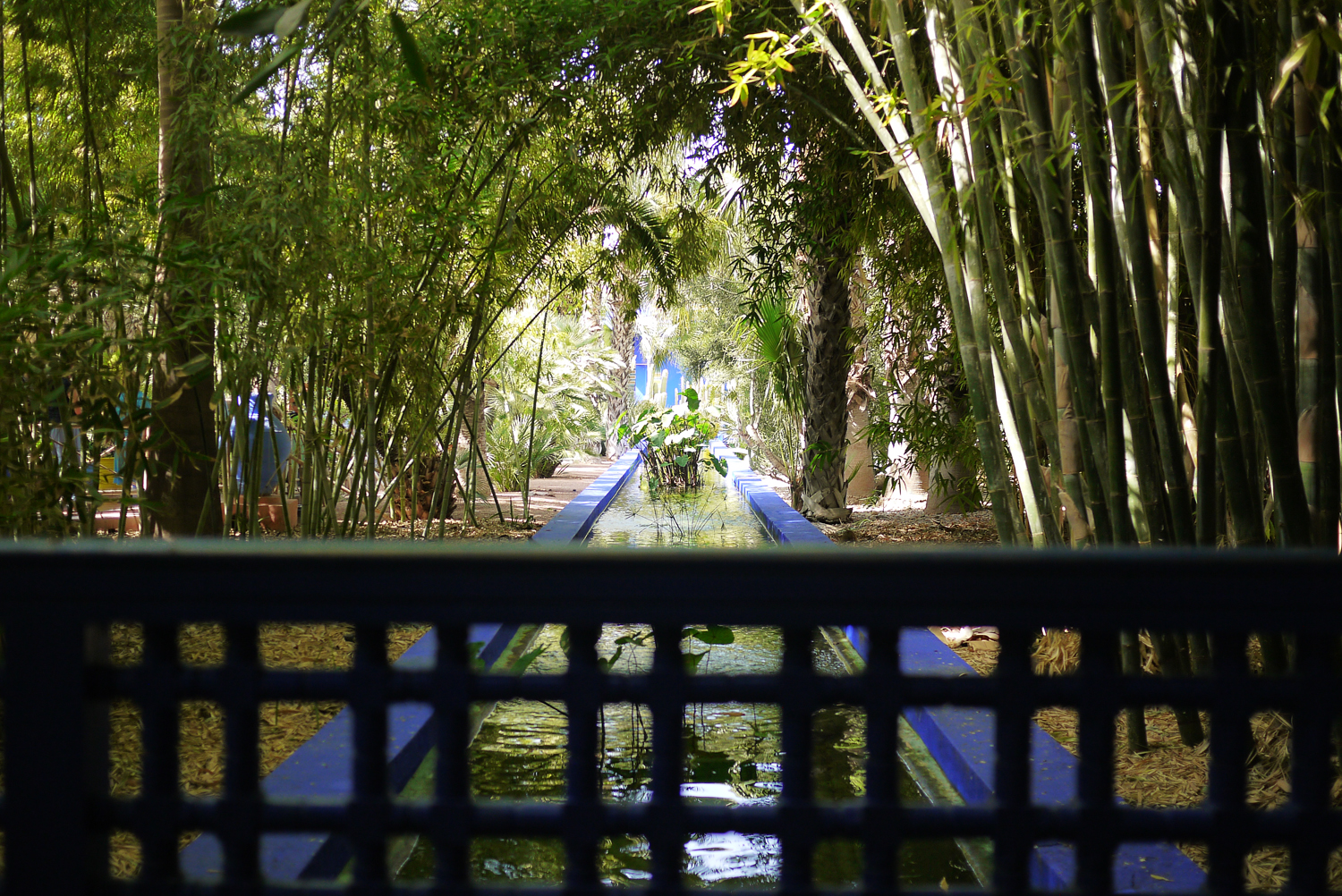 It’s bliss to hear little else here other than the sound of running water and birdsong. Although you still can’t escape the click of a tourist’s camera in some parts. My own included.

A vivid red path flanked with big plant pots in primary colours leads you around the two and a half acre complex, taking you past attractive flower beds, quirky cactus gardens and soothing water features. 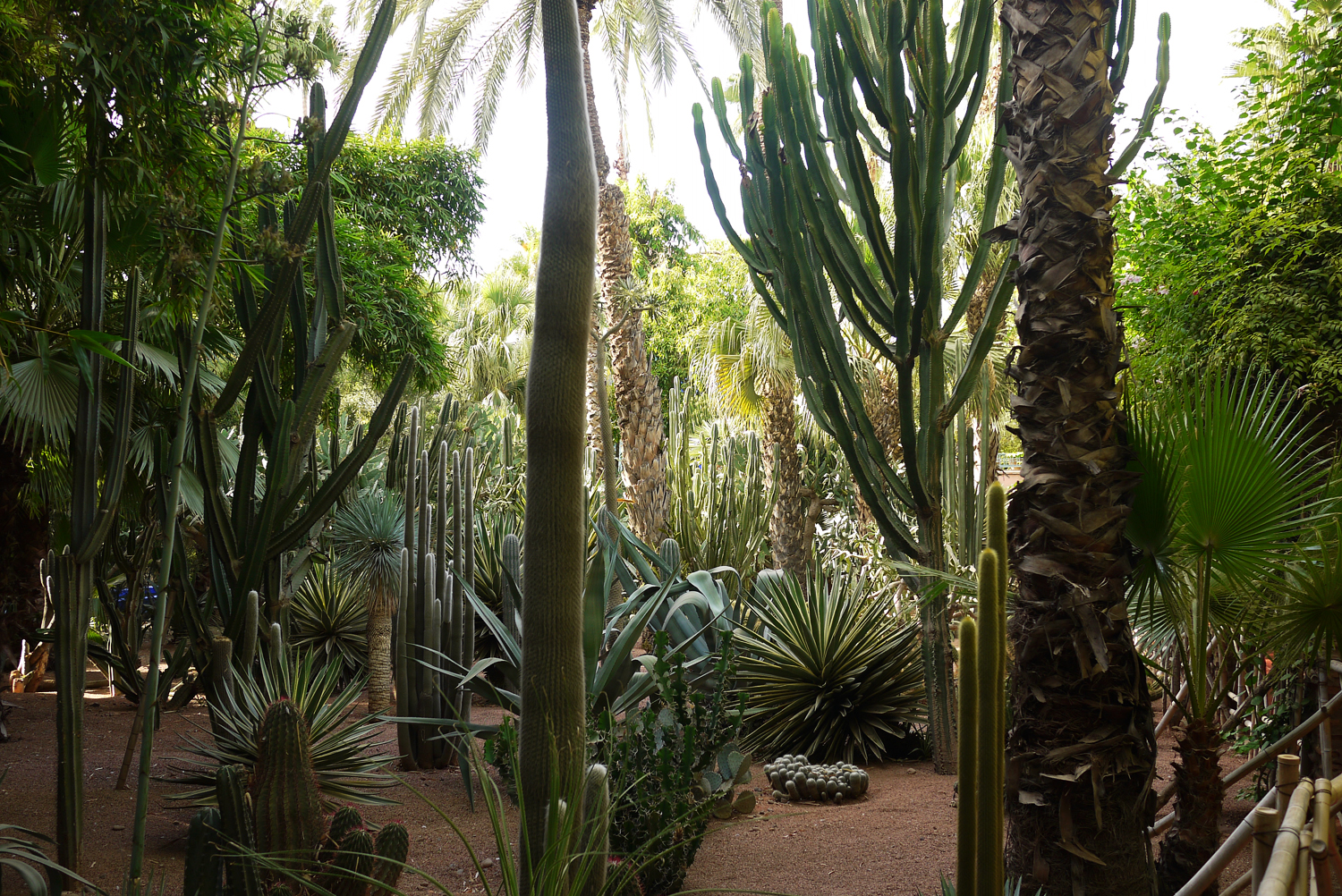 A lovely wooden bridge draped in hanging plants that tickle the top of your head crosses a large pond full of water lilies and lotus flowers. 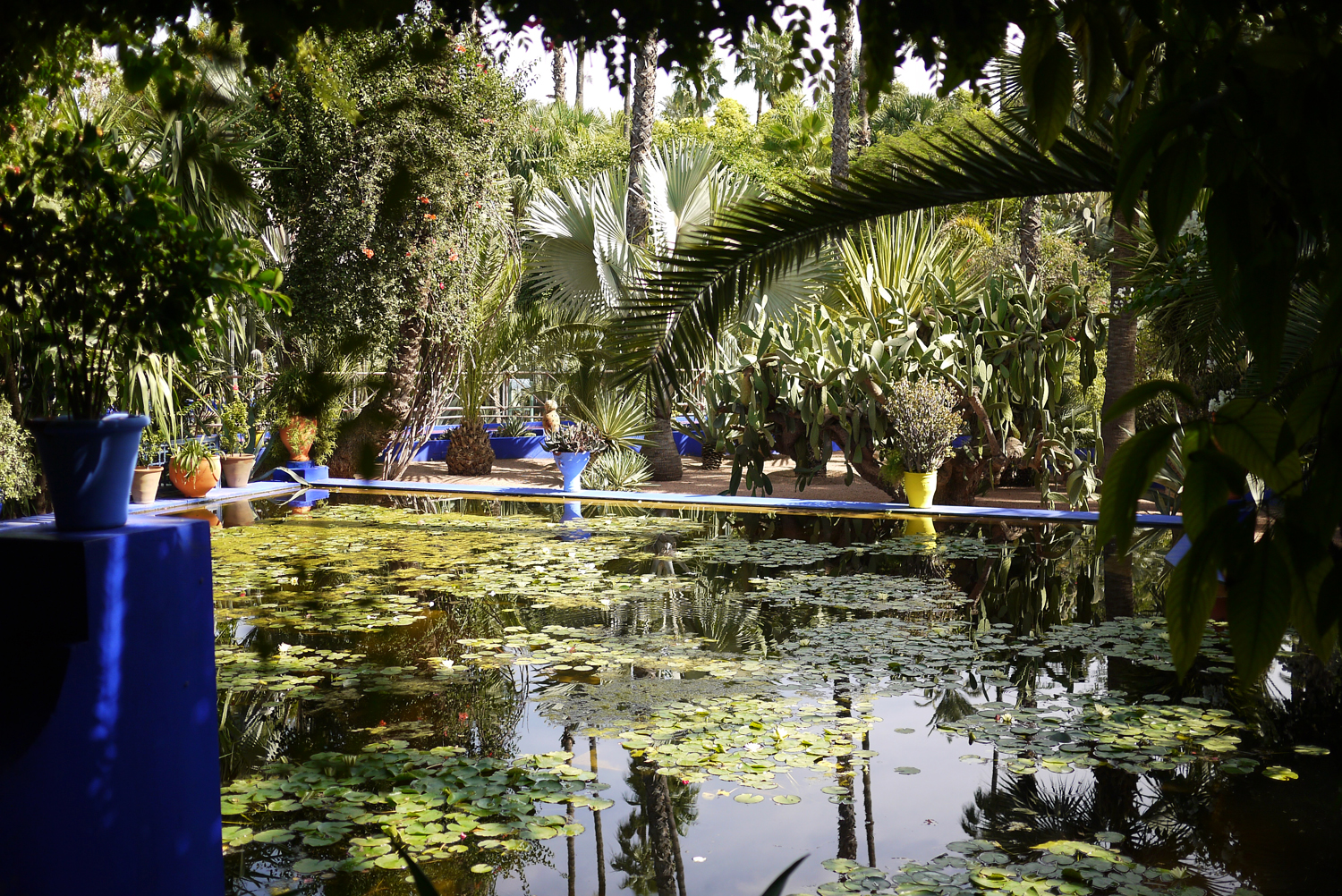 This bridge eventually leads to the Marjorelle Villa.

A striking, art-deco style building, the villa is painted once again in that now familiar blue. It features ornate windows and Moorish designs in contrasting yellow and white. 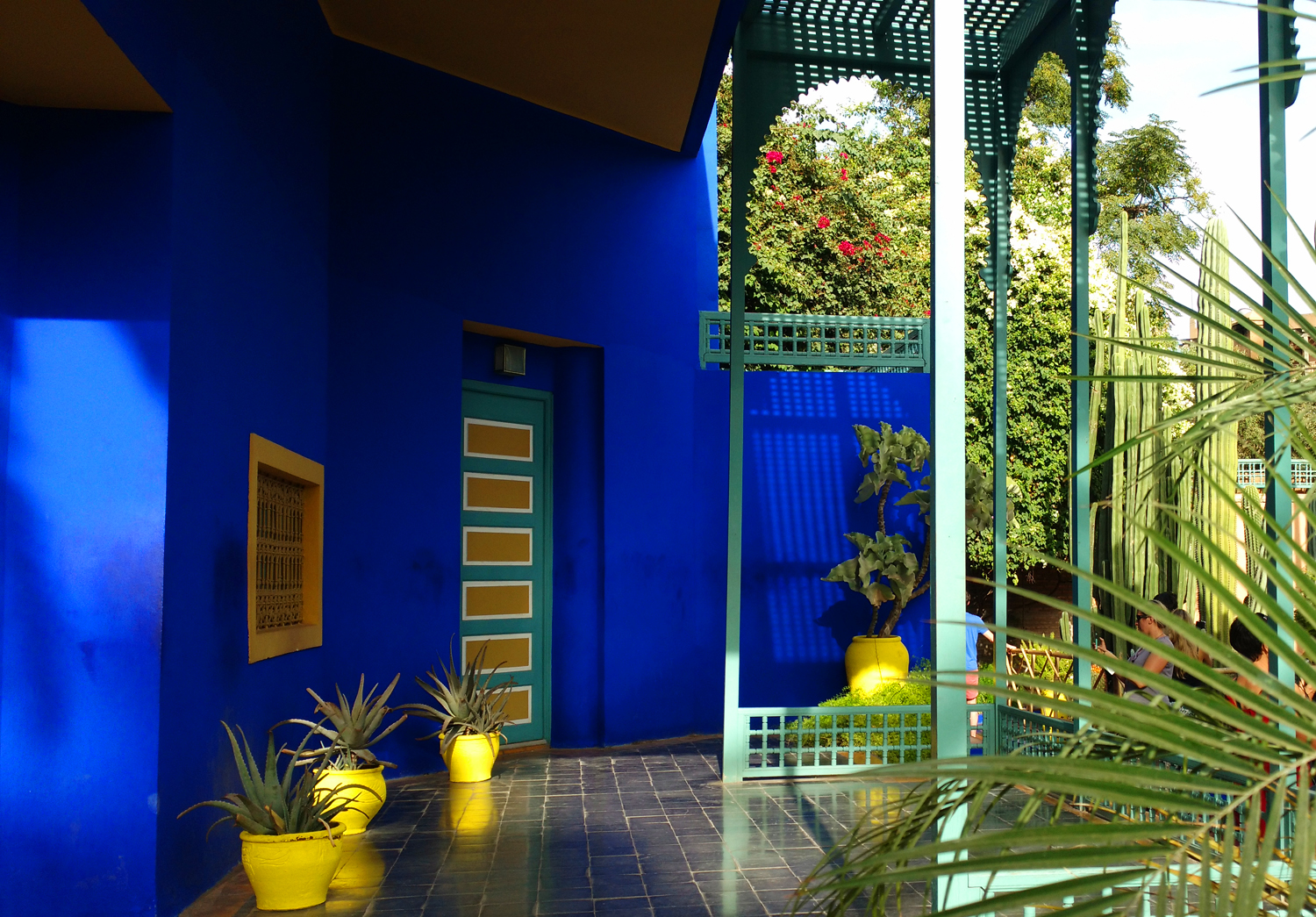 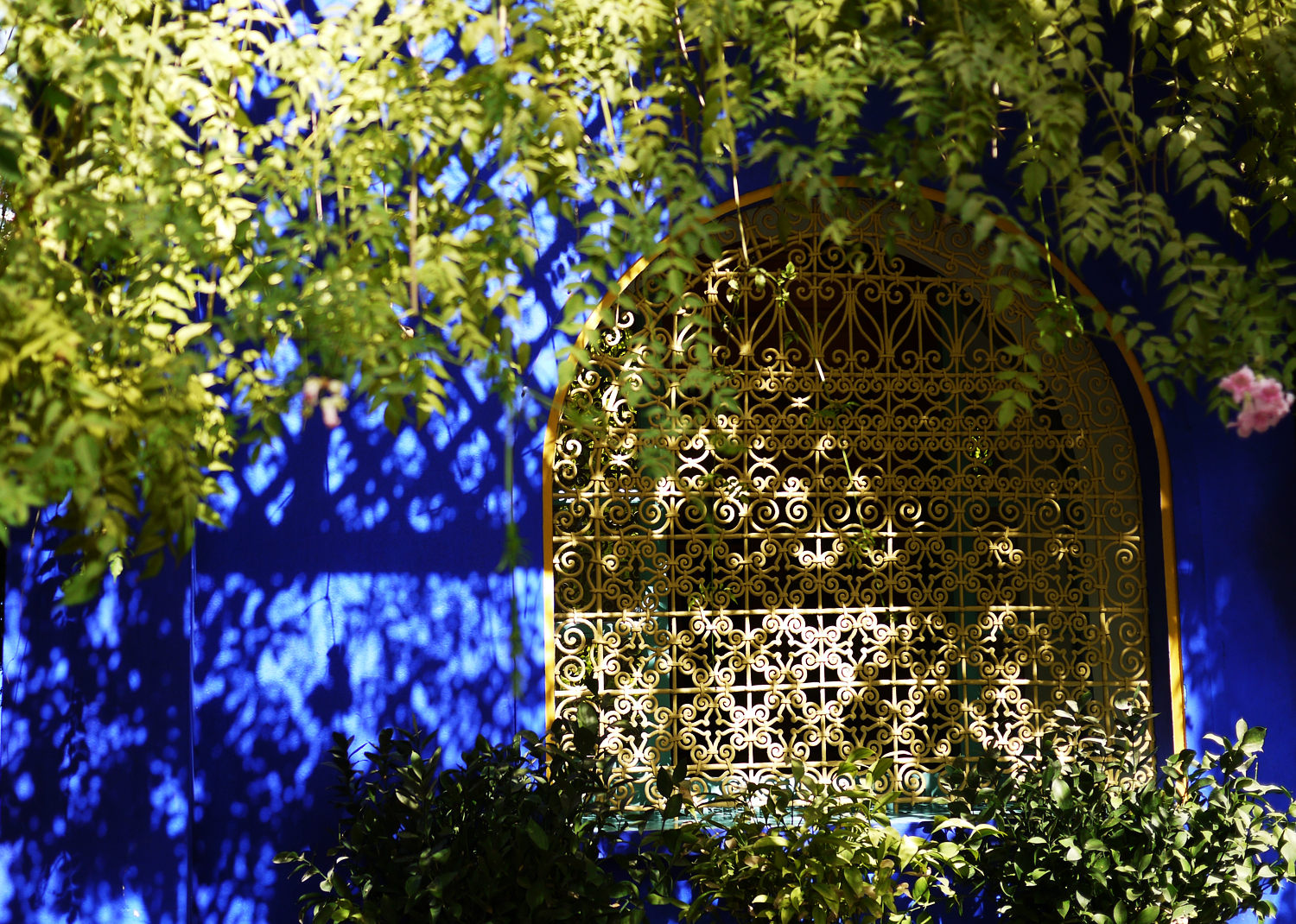 It’s a villa I’d definitely like to call home.

Instead, the villa and connecting painter’s studio is home to the Berber Museum. Not quite in keeping with the art and fashion associated with the lives of Marjorelle and Yves Saint Lauren, the museum focuses on the country’s Berber culture. There are some impressive Berber costumes and jewellery on display here, from a collection that belonged to Yves Saint Laurent, but if you’re pushed for time or on a budget, I wouldn’t say paying the extra to access the small museum is a must. Marjorelle Garden is all about the garden itself, and you’ll feel plenty satisfied just wandering the grounds. 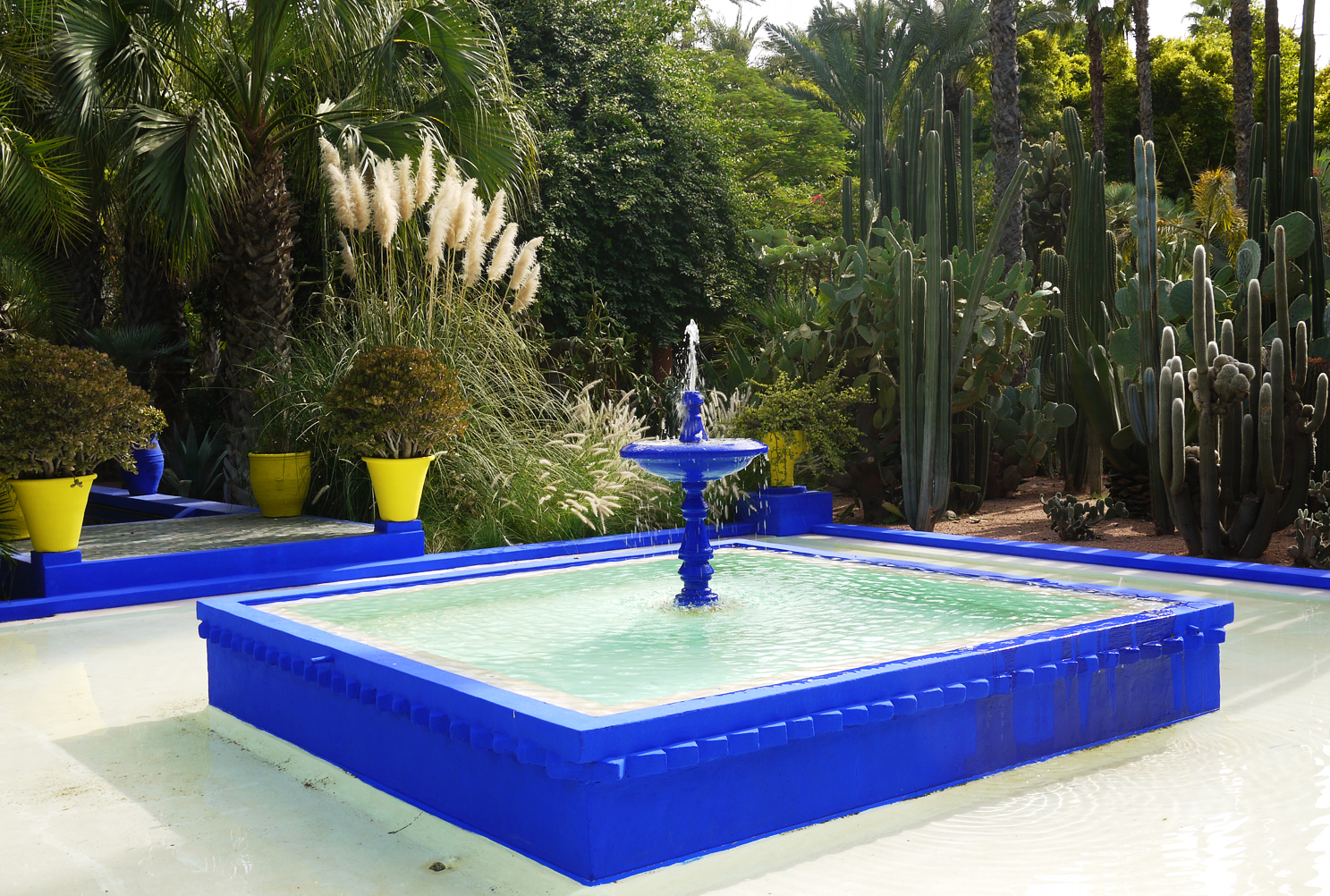 Back outside and fashion fans might want to seek out the Yves Saint Lauren memorial. His ashes were scattered in the rose garden here following his death in 2008. To be honest though, if I was as famous for my stunning visual creations as Yves Saint Laurent, I’d be pretty bummed to the see the bland stone pillar placed here in my memory.

But then at the same time, totally honoured to even be in amongst the beauty of Marjorelle Garden.

So after a couple of relaxing hours spent enjoying the colours, the calmness and the cacti, it was time to drag ourselves away from Marjorelle Garden and head back into the city. But not before grabbing some lunch in the garden’s attractive Café Bousafsaf. This was by far the busiest area of Marjorelle Garden, but you soon forget that when you’re chilling out in the café courtyard with an obligatory refreshing mint tea.

You go to Marrakech FOR the energy and exhilaration. However, there’s no doubt spending an afternoon away from it in Marjorelle Garden is a real treat.

And if Blue Monday meant spending the day surrounded by the blues of Marjorelle each year, it just might be the happiest, most relaxing day of the year instead.