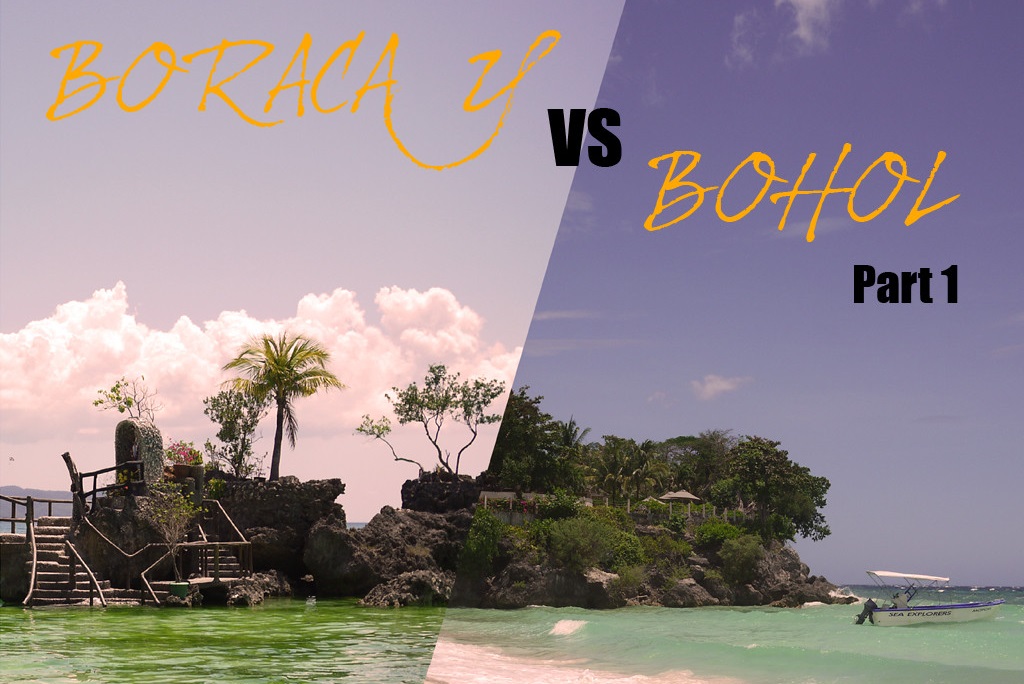 Deciding to visit the Philippines is easy – what with its paradise beaches, world-class diving, majestic volcanoes and more…

Deciding where to visit in the Philippines is where things get difficult. Especially when you’ve limited time, and 7,000+ islands to choose from.

I recently found myself with that very decision to make. I was heading to Manila on business for a week, and tagging an extra week’s annual leave onto the end to go see some islands.

But which island(s) to head to when you’ve only got a week, or less?

It didn’t take much research before the names Boracay and Bohol cropped up as two serious contenders. Two islands within easy reach of Manila (both around an hour’s flight).

For many, it’s a straight choice between the two. Boracay or Bohol.

I managed to squeeze in time on both, so here I’ve decided to pit them against each other on a few key factors, helping you choose which might be the one for you.

Boracay & Bohol – Getting there and around

Both Boracay and Bohol are well served by domestic airlines like Cebu Pacific or Philippine Airlines from Manila Airport. Flight time to Boracay from Manila is just over an hour, to Bohol about one hour 20 minutes. Nothing in it, really.

BORACAY has two airports, Caticlan and Kalibo, opening up more flight options and flexibility. Both are actually on the neighbouring island of Panay (Boracay itself is really very small) and whichever airport you arrive at you’ll need to head to the ferry port to make the short boat trip over to Boracay island.

Once on the island, you can use taxis or tuk-tuks to get around. 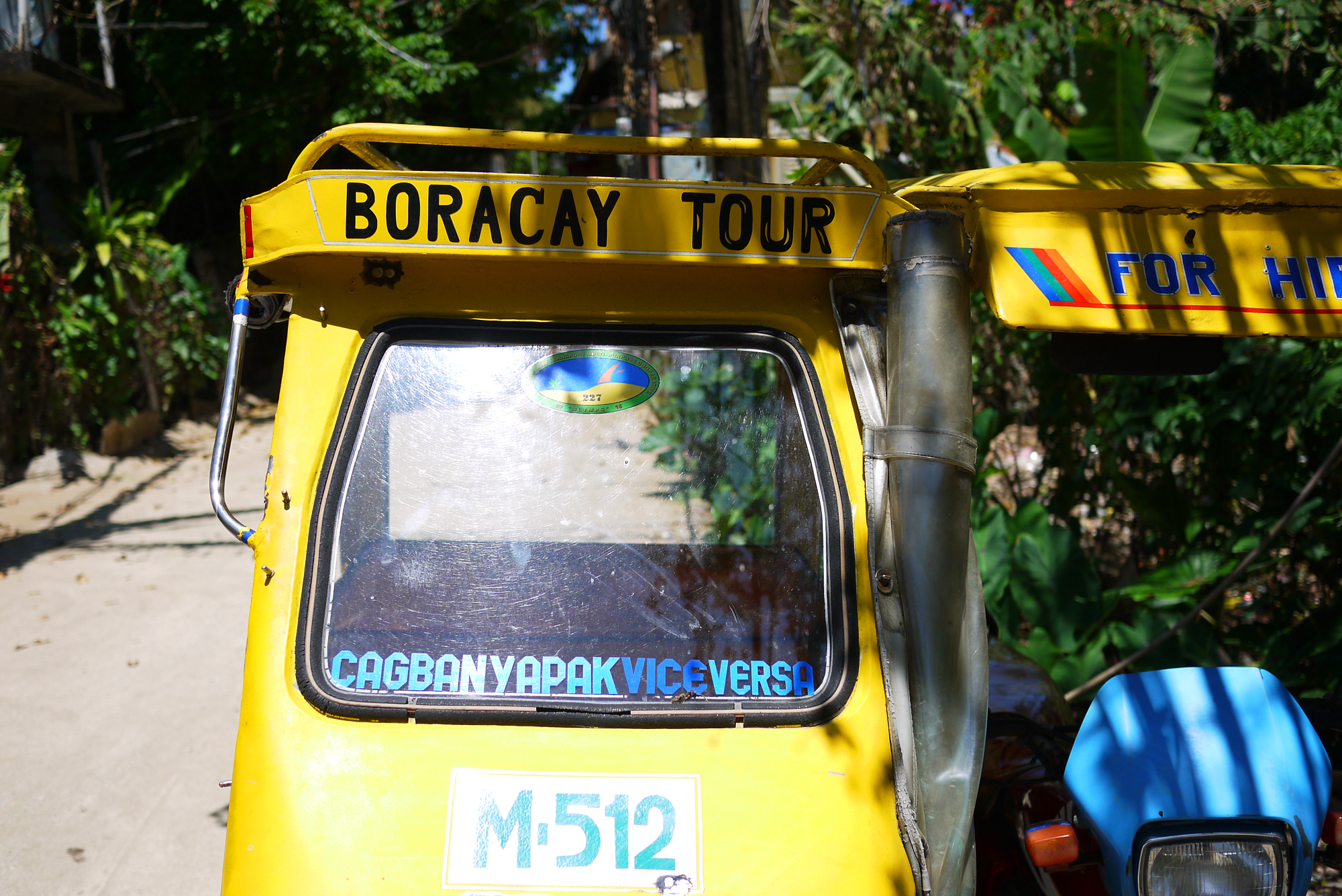 It’s a bumpy ride with the narrow roads pretty poorly kept, but the island is so small you’ll never be travelling for much longer than half an hour, no matter where you’re heading. One main road pretty much dissects the island.

BOHOL has one main airport at Tagbilaran City in the south-west of the island. This is close (about 30-40 minutes in a taxi) to Panglao, where the main beaches are.

Bohol is better served by ferries than Boracay. It has two ports, Tubigon and Tagbilaran, with regular routes coming from neighbouring Cebu island (which has the second busiest airport in the Philippines). This makes for an additional way of getting to Bohol, other than just a flight from Manila.

Once on Bohol, getting around is a little more of a challenge than on Boracay, purely because of the difference in size. Bohol is a ‘whopping’ 4,821km2 to Borocay’s 10.32km2. Not that this makes Bohol particularly hard to explore – there’s always a bike, tuk-tuk or taxi waiting to take you wherever you want, and the roads in the countryside are wide, smooth and well-kept – but travel around the island involves a little more thought and forward planning than on tiny Boracay.

On the whole though, they’re both a doddle to get to and around.

If you’re choosing one over the other, it won’t be because one’s necessarily an easier or quicker trip. Boracay might be easier to get where you want to on a whim due to its size, but really, you’ll be making your choice based on others factors such as…

Okay this is a tough one. Probably one of the main reasons you’re visiting the Philippines is to take in the gorgeous beaches the country has such a reputation for. Both Boracay and Bohol sure contribute to this reputation. But beach experiences on these two islands can be quite different.

BORACAY boasts the famous White Beach. Often named amongst the top beaches in the world. It stretches along much of the island’s west coast and the sand is every bit as white and fine as it looks in the photos, the water every bit as blue, the palms every bit as prevalent. 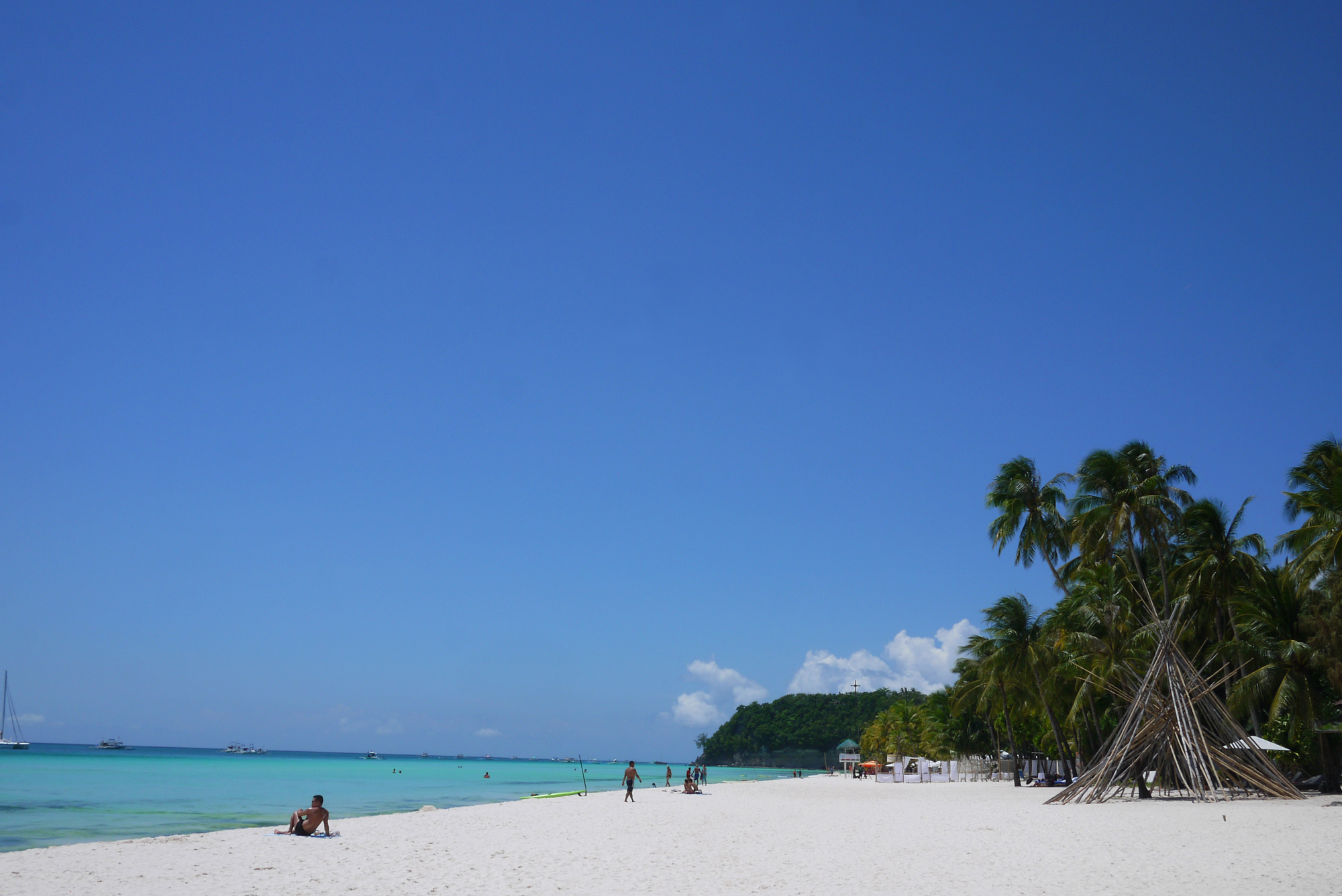 Stunning White Beach on Boracay during one of its quieter moments

It’s beautiful. But it’s a victim of its own popularity. Luxury resorts take over the north end (Station 1), bars, clubs and even a small ‘shopping mall’ (D-Mall) sit behind the middle stretch of the beach (Station 2), whilst things are a little quieter towards the south (Station 3).

But Boracay is the Philippines’ party island, White Beach its party capital, and it’s busy.

It’s built up for sure, but we’re not talking high-rise hotel kind of built up here – just to be clear.

Visit out of season, or nice and early in the day and it’s not hard to see why White Beach is so highly-rated. But its recent commercialisation won’t be for everyone.

Boracay’s beach appeal doesn’t just hinge on White Beach, however. On the east of the island is Bulabog; a windy beach popular with windsurfers and kite surfers. With a different crowd comes a different atmosphere; it’s less for the lazy beach bums and more for the adrenaline seekers. But it’s still a real looker.

And then there’s Puka Shell Beach on the north of Boracay. Ah, Puka… my favourite beach from my time in the Philippines. 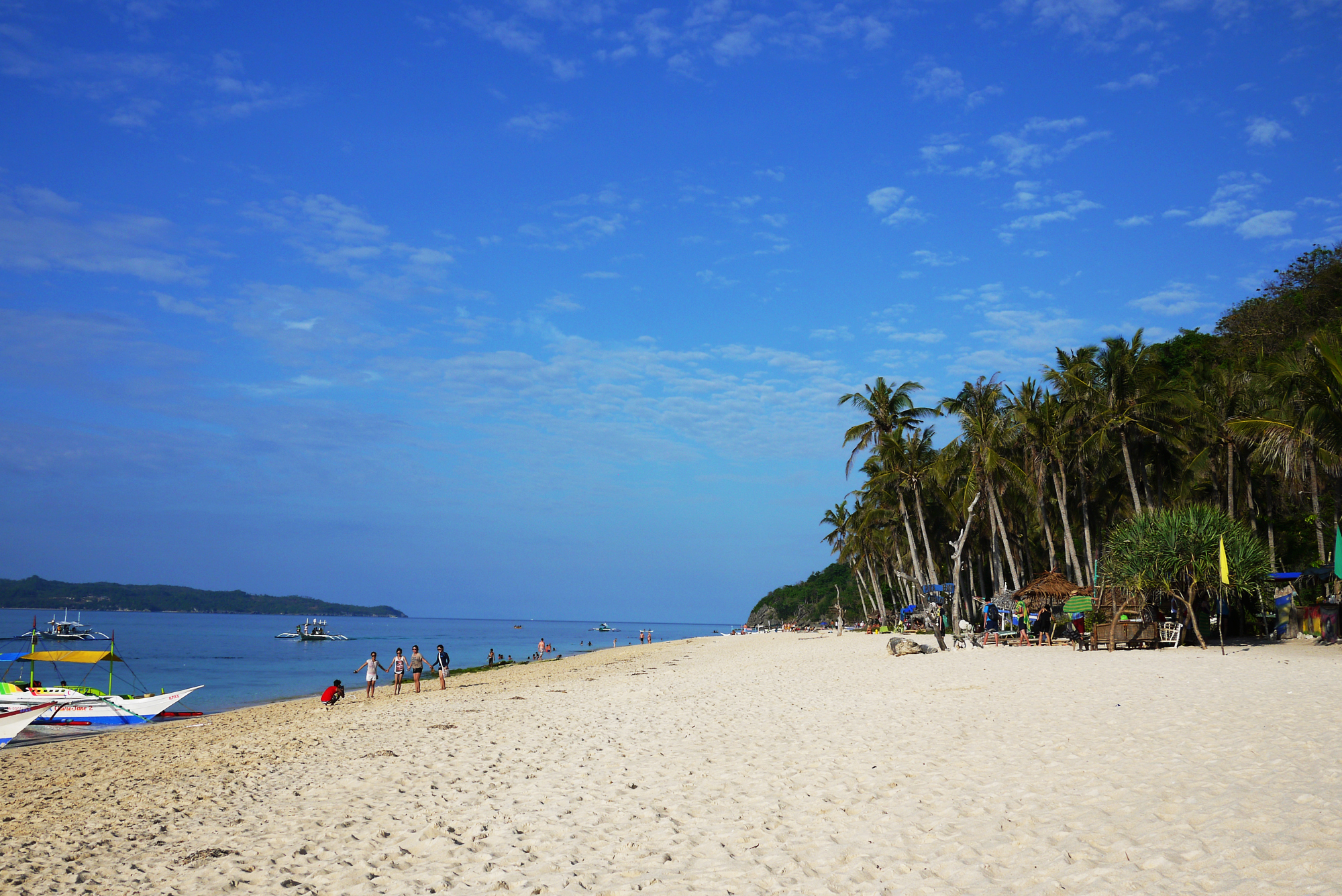 Yet to be developed, there are a couple of beach shacks for food and drink and little else. With a lush green palm-fringed forest as the backdrop to the yellow-white sand and crystal clear waters, arriving on this beach by boat was a genuine “wow” moment. For me, Puka is a paradise beach in the truest sense.

BOHOL’S top beaches are found around the south of the island, and more specifically on Panglao island (connected to Bohol by bridge). This is where you’ll find Alona Beach, Bohol’s most popular stretch of sand. Alona is what I imagine Boracay’s White Beach was like a decade ago, having yet to be developed to White Beach levels. There are bars and restaurants lining Alona Beach, but far fewer of them than White Beach. They’re much simpler in style, and the whole place has a much more chilled-out and friendly vibe. That’s not to say Alona Beach doesn’t get busy though, especially in peak season. It’s just not White Beach kind of busy… yet. 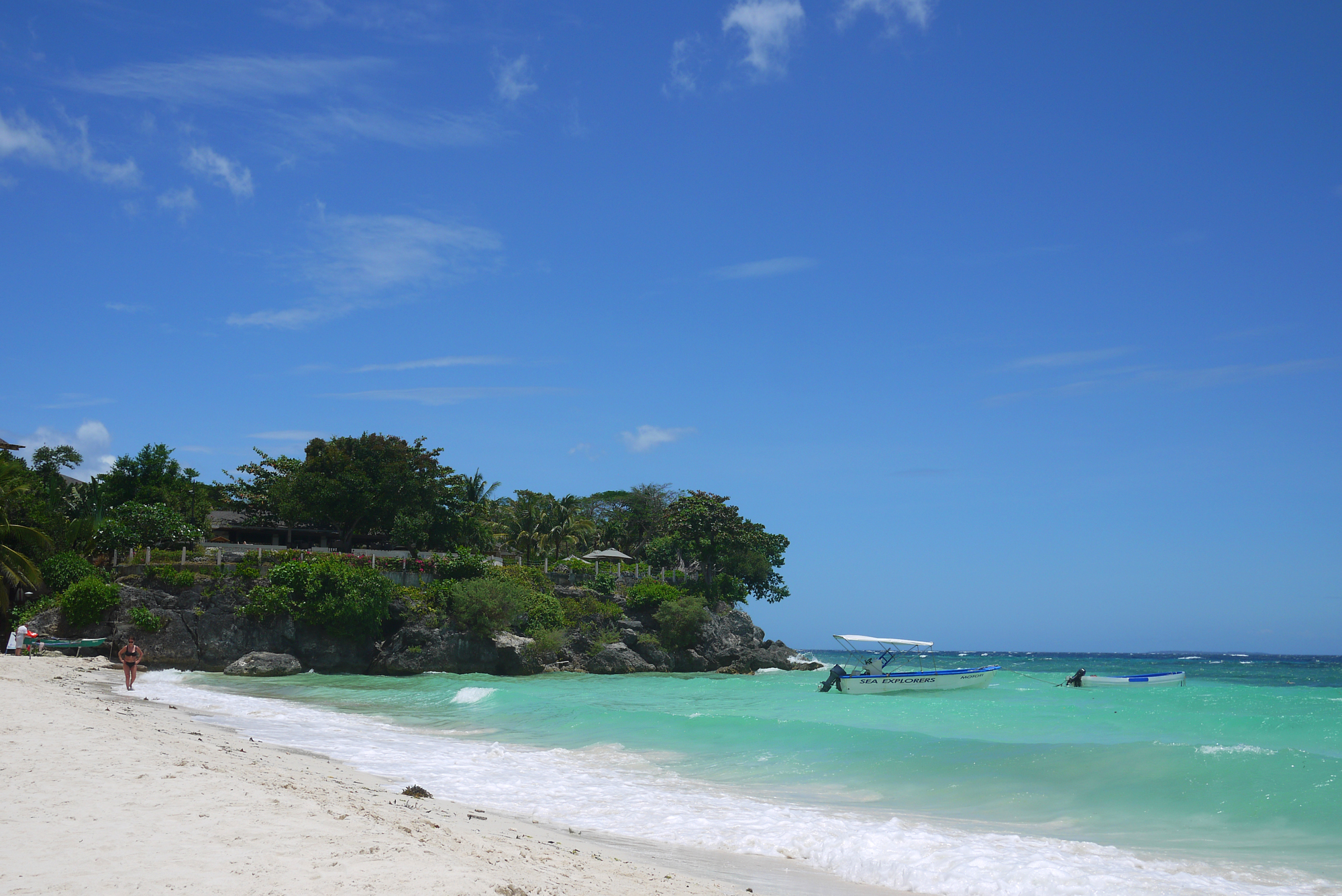 Alona Beach on the island of Bohol

With few luxury resorts Alona Beach is a little less well-kept, but no less beautiful. It has got all the ingredients of a paradise beach, with rocky cliffs to add to the stunning palms, sand and sea. Overall it feels like a more authentic Philippines experience than Boracay’s White Beach.

Not far from Alona Beach is Dumaluan Beach, a more exposed (and therefore a little windier) stretch of sand in front of a couple of luxury resorts, Bohol Beach Club and Dumaluan Beach Resort. 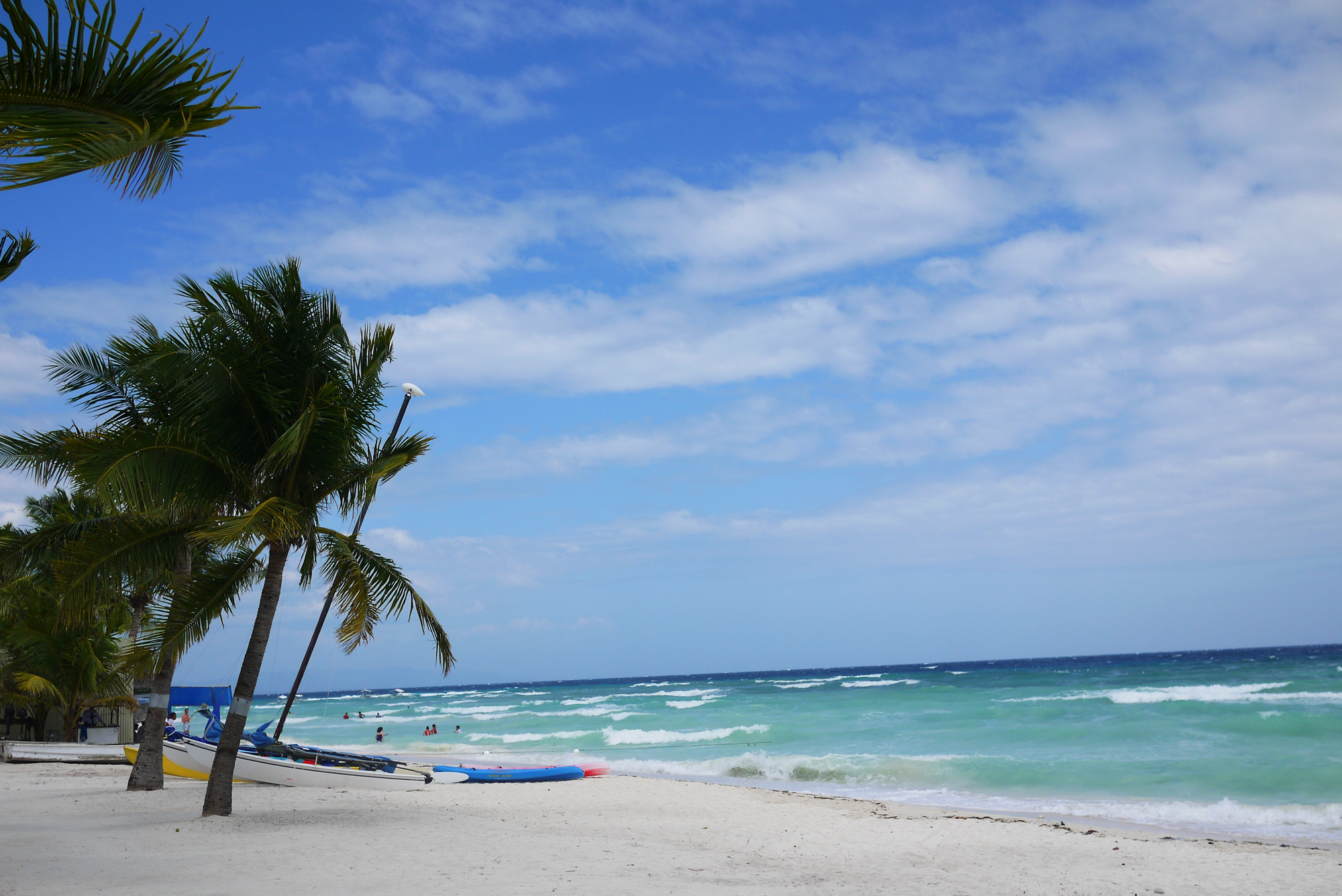 Being connected to these high-end resorts means this lovely beach is more looked after than Alona, but for all its tidiness, it lacks a little in character and life. The only bars/restaurants belong to the resorts – there’s not much going on.

So which island is best for beaches? Well they’re both big-hitters when it comes to amazing beaches, and it totally depends on what you look for in an ideal beach. But personally I’d probably plump for Boracay, because of the variety of beach available in such close proximity to each other. And for Puka Shell Beach which really is the type of beach you travel thousands of miles to experience.

But that’s far from the full story in this Boracay Vs Bohol battle of the islands.

Check out part two, where I look at which is best for Nightlife, Culture and Things to do…