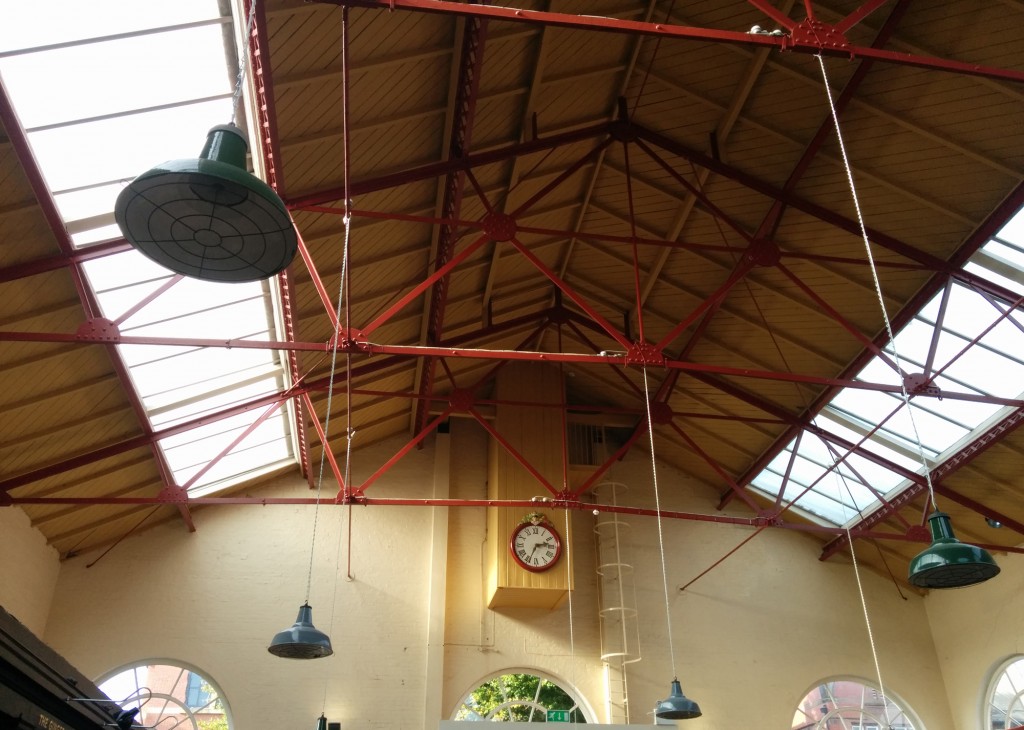 Not ‘can’t function’ hungover. Just the sort of hungover where a hair of the dog and plenty of comforting food are in order.

So with usual lazy Sunday destinations of Didsbury and Chorlton done to death of late, and Manchester city centre the cause of the hangover in the first place, we decided to head over to Altrincham for a bit of a change of scenery. And to check out the much-talked-about, recently refurbished Altrincham Market.

Altrincham has had a bit of an identity crisis over the last few years. It’s one of the North West’s wealthiest towns, yet the empty shops and TO LET signs that litter the high street suggest that it’s suffered more than most towns at the hands of the recession.

In truth, it’s probably more a victim of nearby shopping meccas the Trafford Centre and ever-improving Manchester city centre than the recession. But either way, the once bustling town centre has been in a sorry state for a while. There’s just no reason to go there anymore.

Or at least there wasn’t…

But now, sat drinking my imported Lao Beer in the smart looking Altrincham Market House and waiting for my wood-fired pizza to arrive, I’m thinking that might have changed.

Altrincham Market underwent a makeover back in March, backed by ex-Manchester bar owner and former chairman of Marketing Manchester, Nick Johnson. The renovation has seen the Market Hall enjoy a considerable sprucing-up, along with the adjacent Market House, a listed but run-down space now completely transformed into a swanky food court. 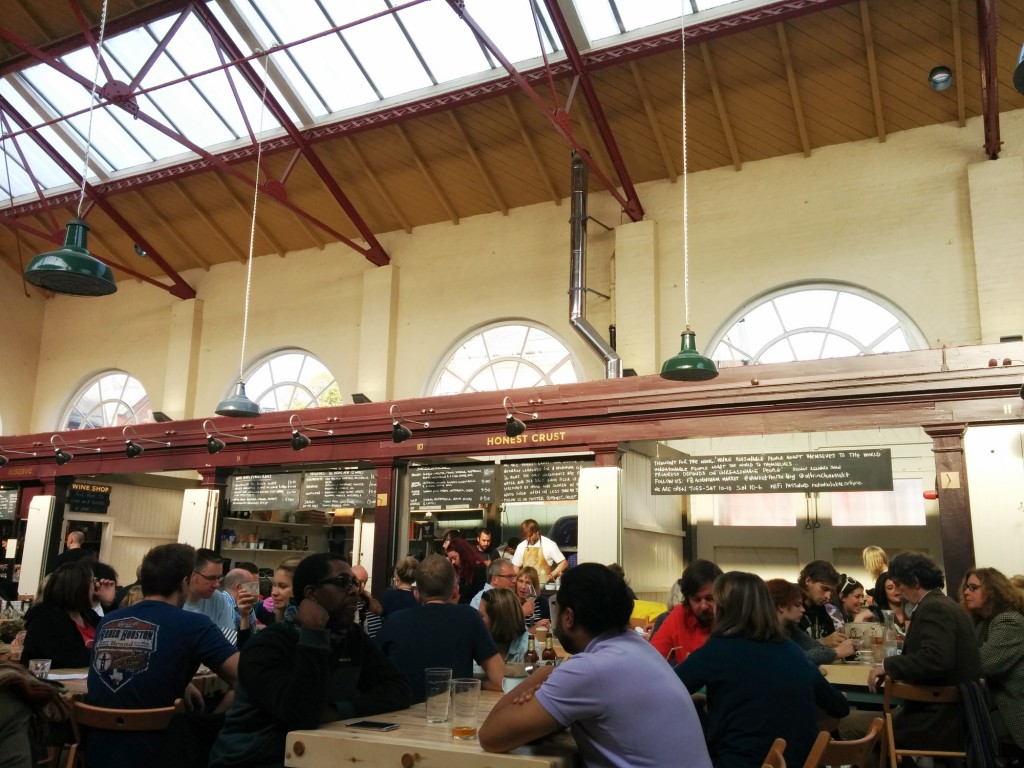 Our visit started in the Market Hall with a wander amongst the traders’ stalls. As the second Sunday of the month, the focus is ‘Farmers, Producers and Makers’, with everything from cured meats to fancy cakes to artisan breads available to taste, buy and takeaway. This, in case you hadn’t guessed, is very good for my hangover.

Especially the hot food stalls also now here, serving the likes of tapas, paella, quality beef burgers and exotic curries – all ready to be enjoyed under the attractive, traditional glass and iron roof of the Market Hall and to the accompaniment of a live band, strumming away in the middle of it all. 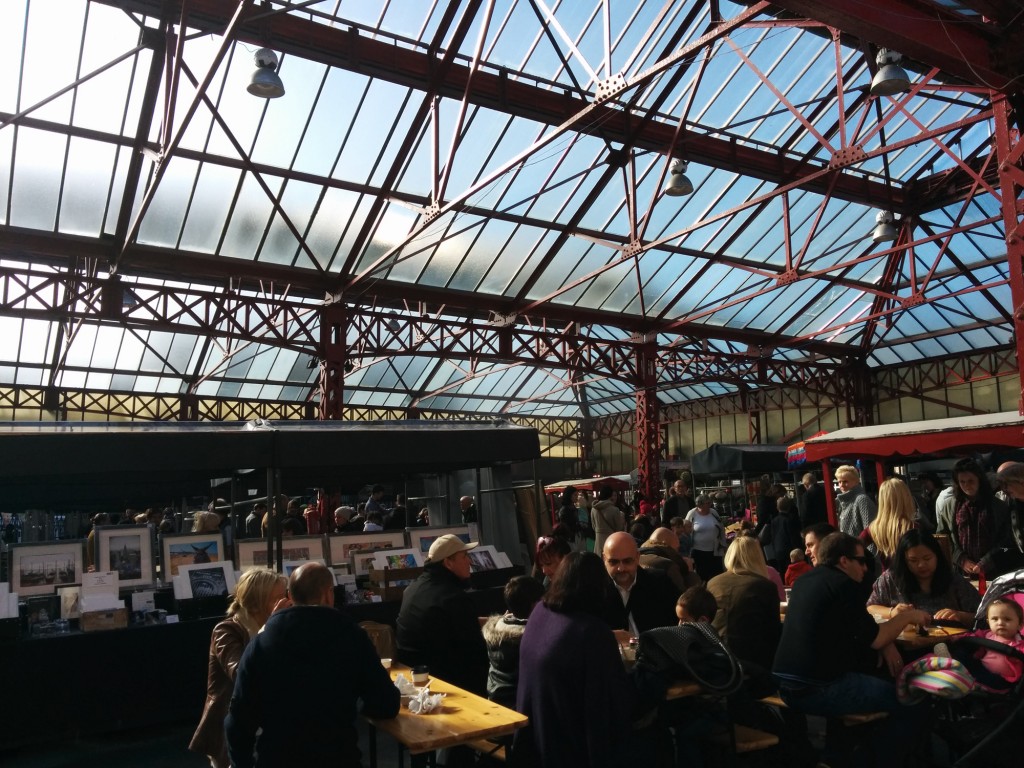 The theme of the traders in the Market Hall changes each week, and throughout the month also includes Home, House and Garden; Vintage Fashion and Furniture; and Crafts and Handmades.

The place is packed and there’s definitely an atmosphere I’ve not felt in Altrincham for a while. Not during the day, anyway.

After a couple of laps browsing the stalls – aforementioned Lao beer in hand – we find ourselves next door in the Market House, the part of Altrincham Market that’s seen the biggest improvements, and therefore the most impressive feature.

Unlike the changing stalls of the Market Hall, this large and airy Market House is home to a permanent selection of food and drink outlets – all trading out of classy, Victorian-style wooden kiosks that run in a square around the hall. So very vintage. So very retro-chic. 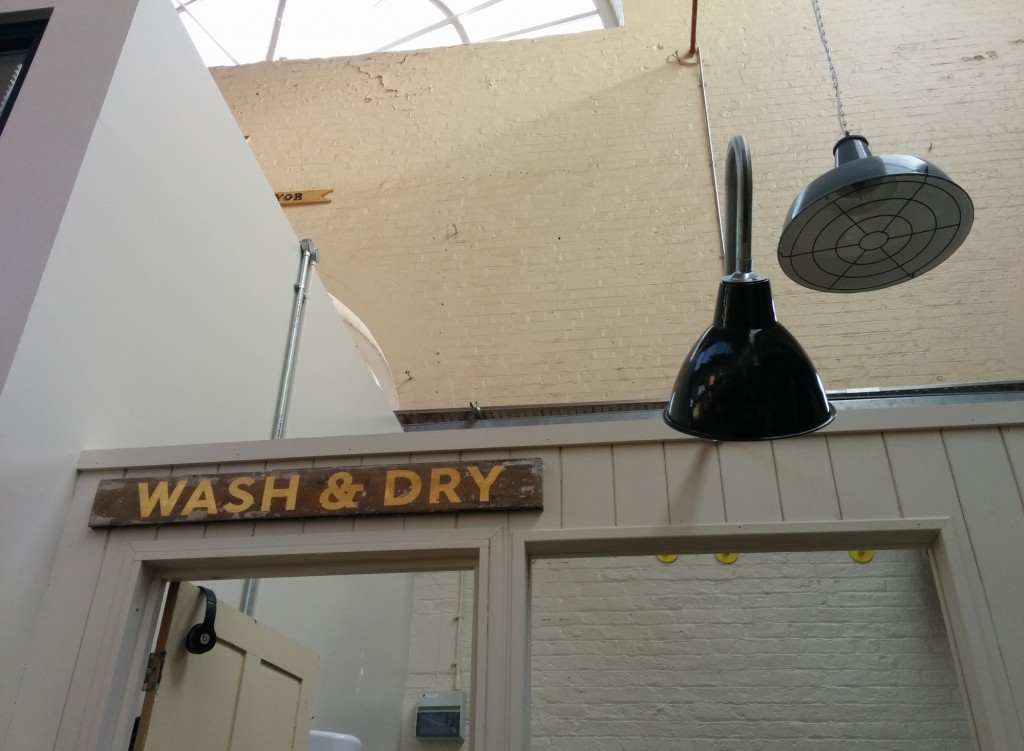 The quirky Wash & Dry area of the Market House, where your plates and cutlery are, erm, washed and dried

In the middle of the square are brushed wooden tables and chairs where people are enjoying their food and drink. But right now there’s more people here than there are spaces to sit. Families, couples and groups of friends mill around the edge waiting for spaces to become free.

To be sure of getting the next available seats, some of the more eagle-eyed are hovering near people who merely look they’re ready to leave, before they’ve actually stood up to vacate the table. And by ‘some’ I mean us.

Such a clamour to be in or around any part of the town is something I would never have imagined in today’s Altrincham. But it’s most welcome.

After a few minutes, our hover-until-they-feel-uncomfortable tactics worked and we’re now settled in our seats in anticipation of the Honest Crust sour dough pizza we can see being prepared freshly for us across the hall. Prepared from scratch, that is – all dough stretching, spinning ‘n’ all. 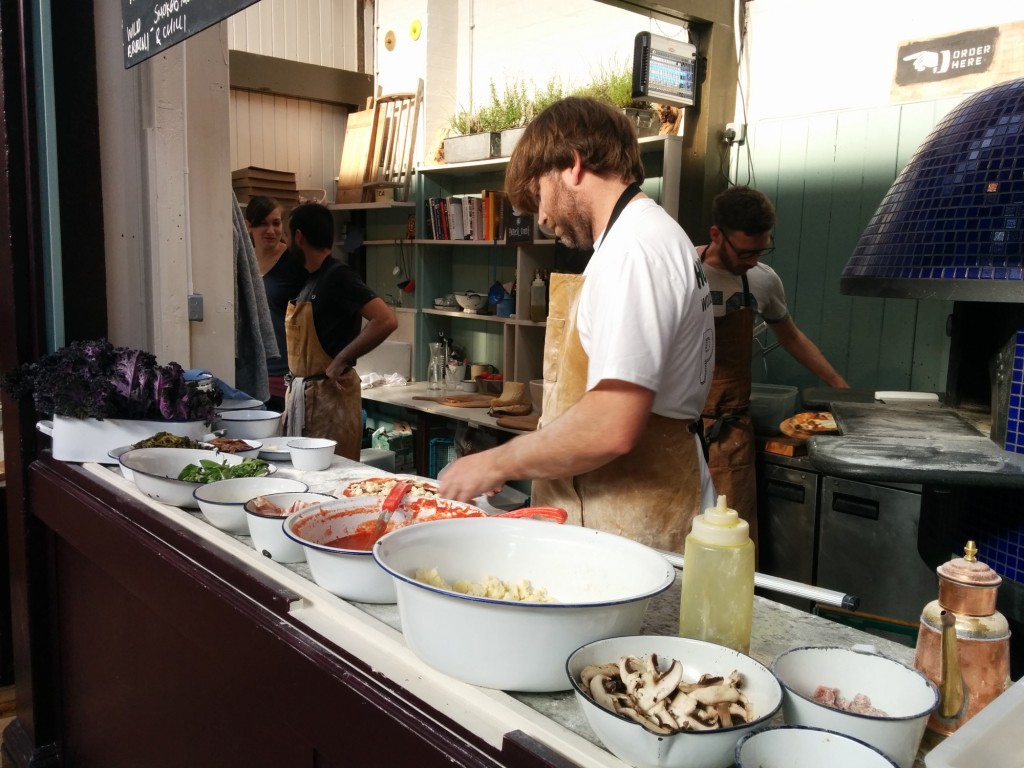 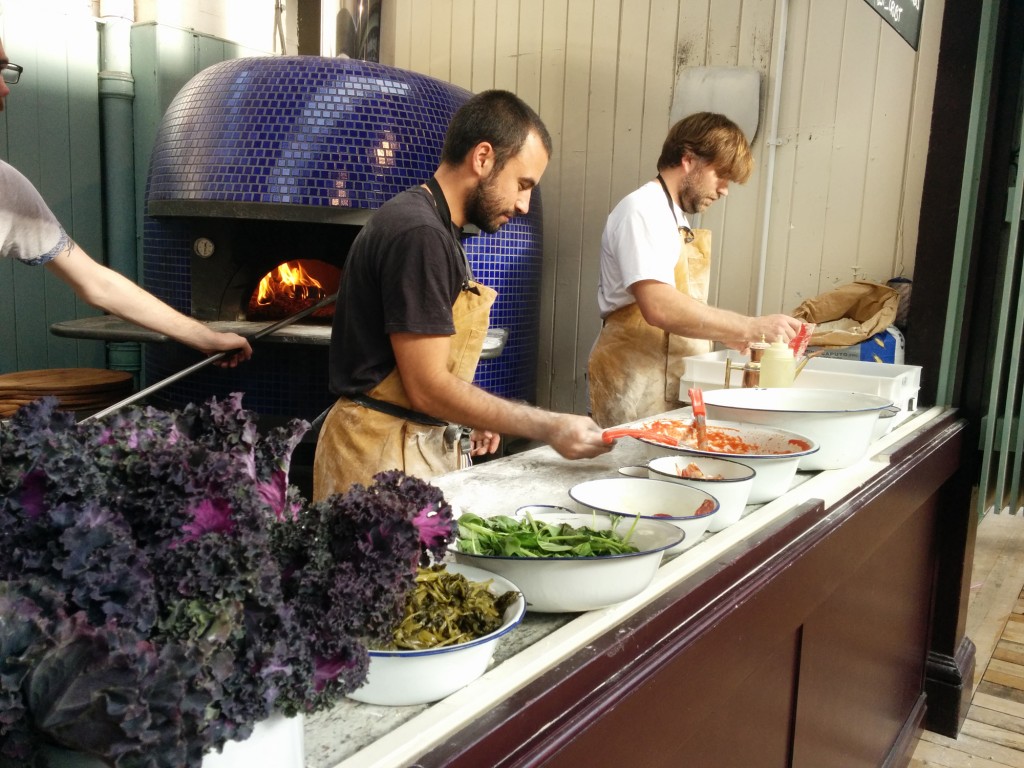 That we’re waiting half an hour for a pizza that takes 90 seconds to cook in the wood-fired pizza oven is testament to the popularity of Honest Crust.

But we don’t mind the wait at all. We’re happy soaking up the buzzy ambience, enjoying our drinks and looking around at the other kiosks doing nearly (but maybe not quite) as much of a roaring trade as Honest Crust are today.

To our left there’s The Ginger Kid, serving a changing menu of regional, seasonal food (slow-cooked belly pork and crackling baguette, anyone?) alongside fine tea and coffee. Then there’s Sam Joseph, a chocolatier selling homemade chocolatey treats and artisan ice cream. Jack in the Box is in the far corner, a real ale bar from local Salford beer upstarts BlackJack Brewery. And next to that there’s Reserve Wines from Didsbury, doubling up as both a wine bar and expert wine shop.

Fine food. Top notch alcohol. Now that’s a decent line-up to be surrounded by on a Sunday, if you ask me. And all under one roof, too.

I start to think of the positive effect this new Altrincham Market might (and hopefully will) have on the nearby businesses, and Altrincham as a whole. Is this what Altrincham has been waiting for to make it a genuine destination town again? It could well be.

Might we see the independent, artisanal theme extend beyond the confines of the Market Hall and House? I certainly hope so.

But for now my pondering will have to wait. Because that sour dough pizza I’ve been banging on about has just arrived, looking all charry, bubbly and divine. 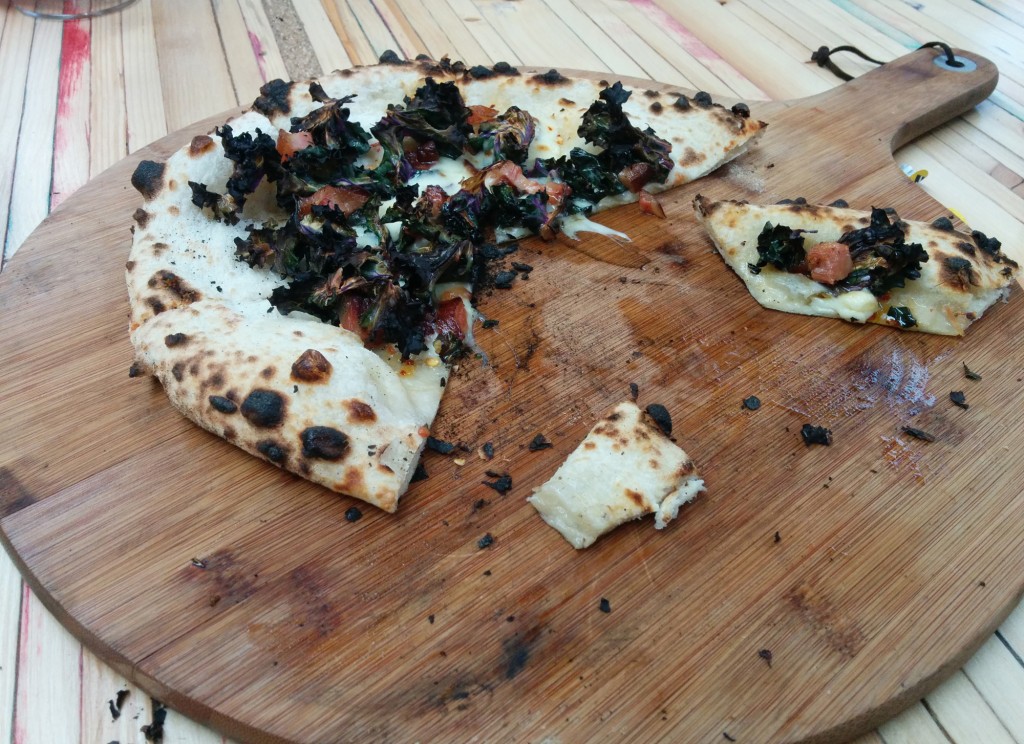 Equally appealing is the fresh ale that’s also landed in front me, right on cue as my empty Lao beer bottle is whisked away by hard-working staff. I’m suddenly feeling perky once again.

I may have come to Altrincham Market to cure the hangover, but I get the feeling this place might just be the start of many more…